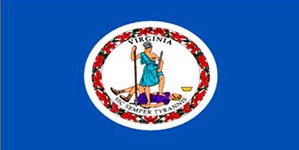 The Virginia state motto is a Latin motto which in English means "Thus Always to Tyrants". A common used mistranslation of the Virginia motto is "Death to Tyrants" - a translation that may explain the motto's rather unfortunate use through history.

The usage of the Virginia motto has quite a bloody history of accompanying assassinations:

The Virginia state motto was suggested by George Mason, an American statesman who today is considered one of the Founding Fathers of America.

The Virginia motto appears as part of the state seal and was adopted in 1776.


Whereas there is only one Virginia state motto, there exist a number of state nicknames for Virginia:


"The Old Dominion"
This Virginia state nickname refers to the fact that Virginia was the oldest of King Charles' American settlements.

King Charles named the Virginians "the best of his distant children", a status of which the inhabitants were proud to possess. 'Dominion' is an expression of ownership of a piece of land or territory.


"Mother of States"
The original Virginian territory was absolutely vast and included present day Illinois, Indiana, Wisconsin, West Virginia, Ohio, Kentucky and a part of Minnesota as well. Also Virginia was the first state to be settled.


"Mother of Statesmen"
Virginia gave 'birth' to quite a decent number of statesmen.

"The Cavalier State"
This Virginia nickname refers to the English Cavaliers that entered Virginia during and immediately after the reign of King Charles I.


Whereas the Virginia motto intends to describe the national 'soul' of Virginia, Virginia state slogans focus especially on attracting tourists, and as you will see, some slogans are more conventional while others, well... let's say use the word 'Virginia' to the fullest:


"Virginia is for Lovers" with a later addition "Live Passionately" and "Where Love Lives"
This popular Virginia state slogan was introduced by the Virginia State Travel Service (today's Virginia Tourism Corporation: VirginiaOrg.com
) in 1969.

The Virginia slogan "Virginia is for Lovers" is still going very strong this very day as it was inscribed into the Madison Avenue Advertising Walk of Fame in 2009.


"Virginia: Down Where the South Begins"
This was an expression used by radio broadcasters because Virginia was most southern of the Middle Atlantic States.


"Virginia is for Lovers: Hardcore, Anything Goes Three-Way Lovers"

"Vagina is for Lovers"

"Vagina: A Place for Lovers"

We can hereby safely conclude that Virginia is the absolute dirty queen of naughty, sex focused Virginia funny state slogans. If you're really 'into' Virginia you can buy these funny slogans on various t-shirts and underwear. 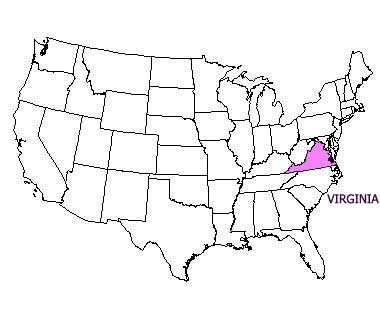 Back to the top of this page about Virginia State Motto