• Watch out and seek cover fun loving brothers and sisters!
• Short funny jokes and other good funny stuff will be mercilessly targeting you from every direction on these hilarious pages!

• If you are anxious to head into the joke bombardment zone ASAP, just go directly to the list of short hilarious jokes.

• If you want to know all that is worth knowing about really funny quick jokes and funny phrases, just read on!

The irresistible urge to write good clean short jokes or short funny stories on walls and other property is not at all a new phenomenon. Apparently, we humans have been doing funny graffiti for thousands of years.

Some of the earliest evidence of funny graffiti is found in Pompeii (an ancient Roman city that was covered with of ash and pumice from the volcano Mount Vesuvius in 79 AD).

In Pompeii scribbling various short funny stuff here and there was apparently so widely practiced that it one day led to one humorous Pompeian writing this funny phrase on a wall:

I am amazed, o wall, that you have not collapsed and fallen, since you must bear the tedious stupidities of so many scrawlers 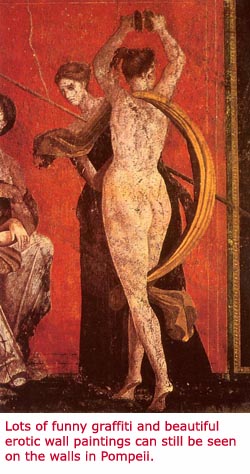 The idea of viewing short hilarious jokes and other short funny stories as a form of literature and worthy of being recorded happened a few centuries later when what is today the oldest surviving joke book was created.

The "Philolegos", or in English "The Laughter Lover" is from somewhere between 400-500 AD and contains 265 ancient jokes.

Here are two of them (when you read the first one, you might notice an uncanny resemblance to a certain dead parrot sketch by Monty Python):

- A man complains that the slave he has recently purchased has died. 'By the gods,' says the slave's former owner, 'when he was with me, he never did any such thing.'

- An intellectual was on a sea voyage when a big storm blew up, causing his slaves to weep in terror. 'Don’t cry,' he consoled them, 'I have freed you all in my will.'


The Big Bang - The Explosive Essence of Short Jokes

So what is it that makes a joke a joke? What's so special about short funny jokes and why do we find them so funny?

• Their sudden twist: What makes a joke different from the mere funny story or humorous tale is this: You are nice comfortably going along the lines until a sudden verbal explosion hits you - the climax. The point when meaning changes into something unexpected:


The things that come to those that wait may be the things left by those who got there first.

- War doesn't determine who is right, war determines who is left.

- Marriage is like game of poker. You start with pair and end with full house.

- Sex on beach is like American beer; fuckin' near water!


• Their briefness: A joke must be short. Some of the best jokes are funny one line jokes. Often, the rule is this: The shorter the joke is, the more powerful the explosion feels:


- It takes many nails to build crib but one screw to fill it.

- An egotist is a person more interested in himself than in me.

- A transvestite is a man who likes to eat, drink and be Mary.

- A good life is like toilet paper ... Long and useful.

- An impotent loser is a man who can't even get his hopes up. 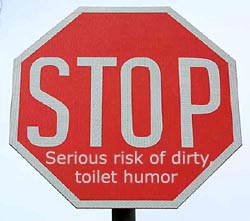 Even though the form of jokes (riddles vs. question/answer etc.) have varied through the ages, there is one persistent constant according to professor in creative writing, Paul McDonald:

Jokes are not scared of dealing with taboos and being a bit rebellious with cultural norms and status ... therefore jokes often centre on the subjects of sex and gender, toilet humour, populations and professions etc.

In this way jokes are a 'legitimate' way of crossing cultural boundaries and letting go of inner steam because, "Hey, I was just joking! I didn't mean it ... much!"


And Finally, Some Short Hilarious Jokes about Jokes

- A joke is like sex. Neither is any good if you don't get it.

- He who laughs last probably didn't get the joke.

- A priest, a rabbi, and a minister walk into a bar. Bartender says, 'What is this, a joke?'

The Short Funny Jokes Buffet - Eat All You Can!

This is our collection of short hilarious jokes. As you can see, we have great ambitions and wish in time to provide you with as many jokes as you can digest ... and then some!

(Please note that some of our listed jokes in the below links are of a sexual nature. If you wish to read jokes suited for people of all ages look for the word 'clean' in the links below!)

You like 'quickies'?
These short jokes make out the 'cherry' of the cake!

What funny one liners lack in length, they win in fun - so prepare for a good laugh!

Back to the top of this page about Short Funny Jokes, One Liners & Hilarious Phrases