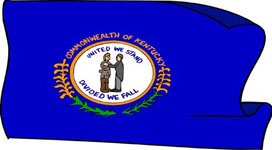 "United we stand, divided we fall"

This Kentucky state motto both appear on the state seal and state flag.

Like many other U.S. state mottos (see Illinois, Louisiana, Nevada, North Dakota, and Vermont) the overall message of the Kentucky motto is that of the power and strength found in unity.

The origin of the Kentucky motto is somewhat hazed but some sources have it that it was Kentucky's first governor, Isaac Shelby, who was also a Revolutionary War hero, that promoted it.

Other sources contend that it was the essayist John Dickinson who came up with the inspiration for the Kentucky motto.

This Latin motto was adopted by the General Assembly of the Commonwealth of Kentucky in 2002.


Whereas there are two versions of the Kentucky motto, there exists quite a list of state nicknames for Kentucky:


"The Bluegrass State"
Bluegrass is very common in the eastern, northern parts of the United States.

In spite of its name, the bluegrass isn't blue, but the blue/purple buds in spring provide a bluish impression when seen from a distance.

"The Corn-cracker State"
There are two different tales to support this Kentucky state nickname:


1) The first version states that Corn-cracker is a reference to the poorer people residing in the mountainous regions.

2) The second version refers to Corn-cracker as a derivation from corn-crake: a crane, that makes a cracking sound.

"The Tobacco State"
Tobacco is one of the main crops of Kentucky - at one point a whole of 2/3 of U.S. tobacco production came from Kentucky.

"The Hemp State"
Another important crop of Kentucky.

"The Dark and Bloody Ground State"
This ominous Kentucky state nickname is a reference to an intertribal fight between Cherokee, Creek, Shawnee, Chickasaw and some other tribes. The fight took place in Kentucky and Tennessee along the Cumberland River.

In "The Kentucky Blue Book" it is said that "Dragging Canoe, a young Cherokee chief, opposed to selling ancestral hunting grounds, warned the whites that they were purchasing a "dark and bloody ground.""


Whereas the two versions of the Kentucky state motto emphasize the beliefs in God and Union, the Kentucky state slogans focus especially on attracting tourists, and as you will see, in both 'serious' and, well, less serious ways:


"Kentucky is a place where spirits are free to soar and big dreams can be fulfilled. We relish competition and cherish our champions for their willingness to push beyond conventional boundaries to reach new heights of success."


"It's That Friendly"
This is the Kentucky state slogan that went before "Unbridled Spirit".


"Where Education Pays"
This Kentucky slogan is Governor Patton’s attempt to emphasize the importance of education to the people of Kentucky:

"Unless people understand that an education is the way to get a good job and provide for a good quality of life, they won’t take advantage of these opportunities.

With constant exposure to a consistent message, we can convince people that Education Pays."

Some of these funny state slogans can be bought on souvenir items such as t-shirts, caps, and stickers. 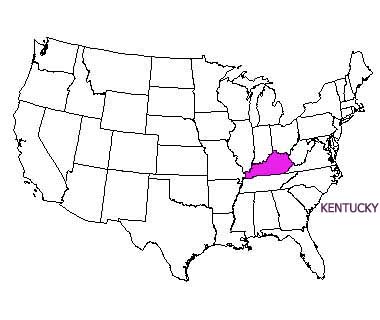 Back to the top of this page about Kentucky State Motto