The "Polar Star" on the state seal has a unique symbolic meaning when combined with the Maine motto. The following paragraph provides some insight into this connection:

"...as the Polar Star has been considered the mariner's guide and director in conducting the ship over the pathless ocean to the desired haven, and as the center of magnetic attraction; as it has been figuratively used to denote the point, to which all affections turn, and as it is here intended to represent the State, it may be considered the citizens' guide, and the object to which the patriot's best exertions should be directed."

In this way the Polar star is compared to Maine, both viewed as 'guides'. In other words, they represent a certain place of reference and trust that will always be there - hence the Maine motto: "I guide".


Whereas there is only one Maine motto, there exist a number of state nicknames for Maine:


"The Pine Tree State"
The state of Maine has really been quite the land of pine forests. Historically Maine is particularly associated with the White Pine which is one of the tallest trees of the eastern northern states. Back in the days the White Pine was especially valued for its size that was ideal for ship's masts.

"The Lumber State"
This Maine state nickname is closely tied to the above one. The many large forests of Maine make the state one of the leading lumber producers. This makes Maine stand strong in the area of paper production.


"The Switzerland of America"
The great mountains of Maine provide this association and Maine nickname.


"The Border State"
Up north Maine borders with Canada.


"The Old Dirigo State"
This is a reference to Maine's official state motto "Dirigo", "I direct", "I guide", or "I lead".


Whereas the Maine state motto intends to describe the soul of Maine: "I direct", state slogans focus especially on attracting tourists, and as you will see in more or less serious ways:


"Worth A Visit, Worth A Lifetime"


"There is More to Maine"
This is the slogan of The Maine Office of Tourism: VisitMaine.com


"The Way Life Should Be "
This is an old Maine state slogan.


"It must be Maine"
This is another one of the Maine state slogans.


"Where America's Day Begins"
This Maine slogan may be seen on licence plates (Maine is the state furthest east and therefore the first state to meet the morning sun).


"Vacationland"
This is an old Maine state slogan that appeared on licence plates back in 1936.

"Maine: We're Really Cold But We Have Cheap Lobster"

"Maine: If Anyone Asks We're Part of Canada"

"Maine Says ... Go Away Tourists, You're Scaring Away All the Lahhbstah"

Some of these Maine funny state slogans are sold as prints on t-shirts, caps and stickers. 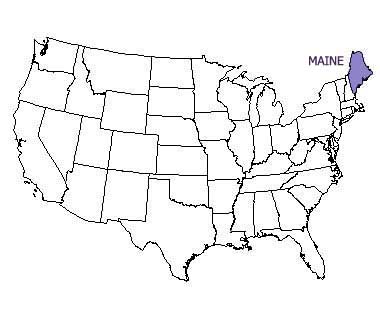 Back to the top of this page about Maine State Motto