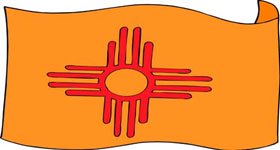 This New Mexico state motto is a Latin motto and in English it may be translated as "It Grows as It Goes".

The New Mexico motto was adopted in 1887 and is taken from "Book VI" of Latin poet Lucretius' epic scientific poem "De Rerum Natura" which means "On the Nature of Things".

The meaning behind the New Mexico motto "Crescit Eundo" (It Grows as It Goes) may at first glance seem somewhat senseless but in the poem it refers to the increasing strength a thunderbolt gradually gains when going across the sky.

This dynamic message of growing stronger and 'being in motion' was the intention by those who selected the New Mexico motto.


Whereas there is only one New Mexico state motto, there exist a number of state nicknames for New Mexico:

"The Land of Enchantment" (Official)
This is the official New Mexico state nickname and it achieved this official status in 1999. The Spanish version of the nickname is "Tierra del Encanto".

According to the "New Mexico Blue Book" this New Mexico state nickname first appeared as a title on a book from 1906 written by American journalist and author Lillian Whiting.

This book title was apparently such a great source of inspiration that in 1935 New Mexican tourism channels started using it to promote the wonders of New Mexico in brochures and magazines.


"The Spanish State"
The high percentage of Spanish speaking people and the fact that New Mexico border with Mexico are some of the reasons for this New Mexico state nickname.


"The Cactus State" or "Land of the Cactus"
Cacti are much abundant in New Mexico especially along the Mexican border.

"The Land of Opportunity" or "The Land of the Heart's Desire"
These New Mexico nicknames both refer to opportunities of beautiful untouched land that would be any man's dream.


Whereas the New Mexico state motto intends to describe the national 'soul' of New Mexico, New Mexico state slogans focus especially on attracting tourists, and as you will see, some are more or less serious in this endeavor:

"Not as Fun as Real Mexico, But at Least We Use Deodorant"

"Almost as Filthy as Real Mexico"

"New Mexico: We Have Reservations"

Some of these New Mexico funny state slogans can be bought on t-shirts and various other souvenir items. 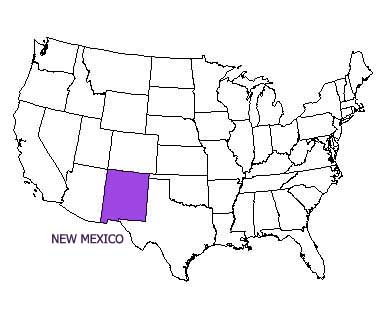