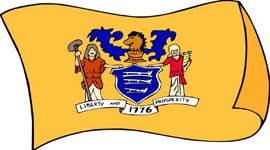 The New Jersey state motto was adopted in 1777 and these strong, optimistic words are featured on both the state flag and state seal.

The message behind the New Jersey motto reflects back to a crucial event in the history of New Jersey, which happened just one year before the adoption of the New Jersey Motto - the declaration of independence.

The year of 1776 represents the culmination of the colonists' many year long dissatisfaction with the British ruling: among other things their restrictions on trade and their high taxation. So in 1776 the New Jerseyans declared their independence to Britain and severed their connection to the King.

Seen in this light, the New Jersey motto reflects powerful, patriotic sentiments of independence and optimism towards the future. The New Jersey state motto may therefore be seen as a symbol of national freedom.


Whereas there is only one New Jersey state motto, there exist a number of state nicknames for New Jersey:


"The Garden State"
In historian Alfred M. Heston's work "Jersey Waggon Jaunts" (1926) he writes that "The Garden State" was an expression used by a respected Camden attorney, Abraham Browning:

"In his address Mr. Browning compared New Jersey to an immense barrel, filled with good things to eat and open at both ends, with Pennsylvanians grabbing from one end and the New Yorkers from the other. He called New Jersey the Garden State, and the name has clung to it ever since."


Since then this New Jersey state nickname has been associated with New Jersey truck farms that provide cities with floral and agricultural resources.


"The Clam State"
This New Jersey state nickname is a reference to the richness of clams in the Delaware Bay.

The Camden and Amboy Rail Road was New Jersey's first railroad and the railroad was in fact, the third in the states.


"New Spain" or "The State of Spain"
In 1812 Joseph Bonaparte, the King of Spain, fled to New Jersey where he build his "palatial mansion" to among other things entertain foreign dignitaries.

Philadelphians were supposedly jealous of New Jersey's luck to have such a prestigious royal resident and humorously referred to New Jersey as "New Spain" or "The State of Spain".


"The Foreigner State"
With the same humorous smile New Jersey was seen as a land filled with foreigners under the influence of the ex-king of Spain.

"The Pathway of Revolution"
This nickname is a reference to the Revolutionary War period and in particular to battles fought on New Jersey ground.

New Jersey is also referred to as "the crossroads of the American Revolution" because of its unique geographical location during the Civil War. Being positioned between New York City and Philadelphia it was host to many troop movements back and forth and was the physical ground for many battles.

"New Jersey, Come See For Yourself"
This New Jersey state slogan is from 2006 and is a slogan chosen by the people of New Jersey. This winning slogan was submitted by Jeffrey Antman of Passaic.


"New Jersey and You: Perfect Together"
The official New Jersey state slogan from 1982.

"New Jersey is for Dirty Sluts"

"I Got Bada Boom Bada Binged in New Jersey"

"New Jersey: We don't Pump our Gas, We Pump Our Fists"

"New Jersey: You Want Sluts? We Got Sluts!"

Some of these New Jersey funny state slogans can be bought on t-shirt and various other souvenir items. 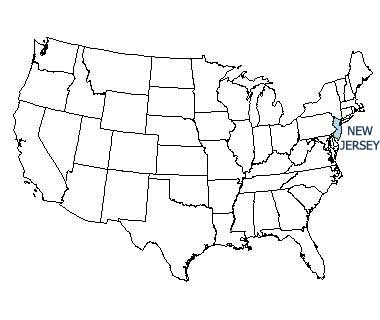