"In God We Trust" (Official)


The official United States motto was first seen on a coin during the Civil War in 1864.

But it was only much later (July 30, 1956) during the cold war it was proclaimed by Congress and signed by President Dwight D. Eisenhower.

The official adoption was an attempt to differentiate between the West's Christian values and the atheistic values of communism.

If we go further back, the U.S. motto was born out of a wish to combine religious and national sentiments. The initial promoter was a Rev. M.R. Watkinson of Ridleyville PA who ambitiously wrote several letters to the Secretary of Treasury, Salmon P Chase, suggesting among other things "God, Liberty, Law".

This specific suggestion in itself was not accepted but the idea of fusing religious and national feelings was, so in 1863 James Pollock (Director of the Mint) was asked to come up with a United States motto that could be used on coins.

Chase chose a variation of the above "In God We Trust". The sentiments behind the U.S motto was that the Union sided with God in relation to the issue of slavery. The State of Florida has the same motto as the United States.

"E Pluribus Unum" (Former unofficial motto)
This U.S. motto is a Latin motto which in English mean "One From Many" or "One From Many Parts".

This U.S. motto became part of the great seal in 1782 and was considered the national motto. The symbolic meaning behind the motto was the great value of fusing of many different parts into one strong unit - from individual units to a federal state.

Whereas there is only one official U.S. motto, there exist a number of state nicknames for the U.S.:

"Uncle Sam"
This U.S. nickname symbolically represents the government of the United States.

"Uncle Sam" was first seen as a cartoon character in magazines and newspapers in the early 19th century.

The story goes that the inspiration for this "Uncle Sam" character was a meat purveyor by the name of Samuel Wilson. Known as Uncle Sam he put his initials (U.S.) on his meat. Subsequently U.S. was seen as an abbreviation for the United States.

It was only later that Uncle Sam evolved into the white haired man with the top hat that we know today. 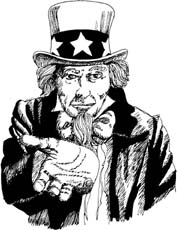 "The Land of the Free"


"The Melting Pot"
This American nickname is a metaphor for a society in which internal differences 'melt' together and become a unified whole.

This nickname is most often used when talking about the desirability of immigrants' assimilation. This notion, however, is challenged by advocates of multiculturalism.

"The Promised Land"
Usually this nickname refers to Israel, but it has only been applied to the USA.


Whereas the United states motto intends to describe the important national values of the United States. United States slogans focus especially on attracting tourists, and as you will see, some are more serious in tone than others:

"This is America: We Don't Redistribute Wealth, You Earn It"

Some of these United States funny slogans can be bought on t-shirts, mugs, caps and the like. 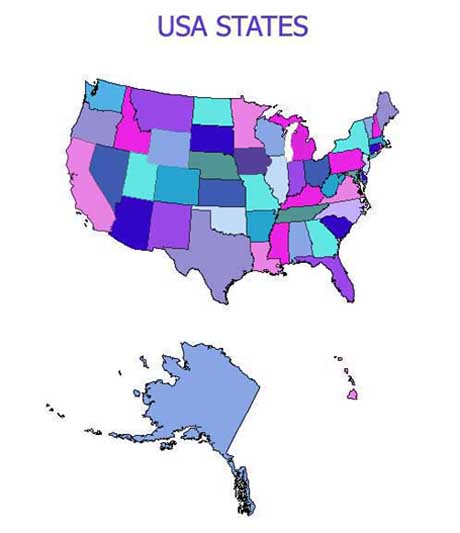 You might also like to read something related to the United States motto, United States nicknames and slogans at the page Funny State Slogans

Back to the top of this page about United States Motto