The Illinois state motto was adopted in 1819 and also figures as an element of the state seal. The Illinois motto symbolically reflects the power and pride of being a small state within a larger state.

The Illinois motto therefore intends to represent the, at the same time, independency of the state of Illinois and the strength it provides when being part of a greater union. In this way the Illinois motto may be perceived as a kind of paradox.


Whereas there is only one Illinois motto, there exist a number of state nicknames for Illinois:

In this way both the Illinois state motto and the official Illinois state nickname focus on proud, patriotic values such as 'union', 'indpendency' and strong leadership.

Illinois is the state where Lincoln started out his political career with four terms in the Illinois General Assembly (1834-1841). It was only later, in 1861, he became President of America.

"The Prairie State"
About 20 million years ago the grass of the prairie began to take form. Today in some areas only 1% remains, so the state of the prairie is in high danger of being destroyed. In an attempt to honour the prairie, Illinois has reserved a full week in September for "... holding appropriate events and observances in the public schools and elsewhere to demonstrate the value of preserving and reestablishing native Illinois prairies."


"The Garden of the West" or the "The Garden State"
This Illinois nickname was earned because of the miles and miles of old prairie land and the unending fields of corn and soy beans.


"The Corn State"
Corn is one of the pillars in the agricultural economy of Illinois. The region referred to as "The Corn Belt" is found in Iowa and Illinois.

"The Sucker State"
The origin of this Illinois state nickname has spread out from three different legends:

"Egypt"
This is a reference to the fertile ground around Egypt's Cairo after the flooding of the Nile.

Whereas the Illinois state motto intends to describe the proud and patriotic 'soul' of Illinois: "State Sovereignty, National Union" - Illinois state slogans focus especially on attracting tourists, and as you will see in both 'serious' and funny ways:


"Illinois: Mile After Magnificent Mile"
This is slogan of the official web site of the Illinois Bureau of Tourism: EnjoyIllinois.com

"The new theme we've adopted for Illinois is Right Here. Right Now., which I believe captures the energy and forward-looking vision that my administration has taken in addressing the challenges and opportunities facing our great state."

"Illinois: Only Morons Pronounce the "S""

Some of these Illinois funny state slogans may be bought on t-shirts, aprons, caps etc. 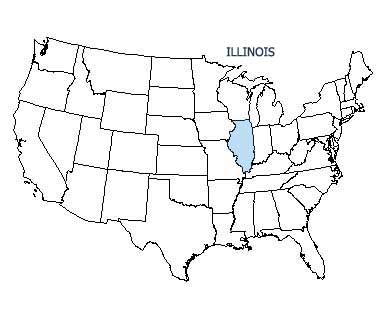 Back to the top of this page about Illinois State Motto