A Real Treasure of Funny Quotes
and Hilarious Inspirational Sayings

• Funny quotes and funny sayings galore - all for you to explore!
• May this rare treasure of humorous quotes that we give away truly inspire an absolute wondrous day!
• Alright, enough with this poetic wit, let's get on with some good hilariuos quotes sh...!

Some of the greatest thinkers of all times not only managed to squeeze so much truth into so few words. They could also do it in ways that were hilariously funny.

They just seemed to have such a delicate grasp on the language that we can just sit back and enjoy for its simplicity, beauty ... and fun.

It's like they really 'chew' on each word, taste it, feel texture and just explore all facets of it.

Here are some hilarious quotes by famous people:

I am free of all prejudices. I hate everyone equally.
~ W.C. Fields ~

I can resist everything except temptation.
~ Oscar Wilde ~

A casual stroll through the lunatic asylum shows that faith does not prove anything.
~ Friedrich Nietzsche ~

Few things are harder to put up with than the annoyance of a good example.
~ Mark Twain ~

I have the simplest tastes. I am always satisfied with the best.
~ Oscar Wilde ~

Always remember that you are absolutely unique. Just like everyone else.
~ Margaret Mead ~

Some cause happiness wherever they go; others, whenever they go.
~ Oscar Wilde ~

The advantage of a bad memory is that one enjoys several times the same good things for the first time.
~ Friedrich Nietzsche ~

Live everyday like it was your last, and eventually you'll be right.
~ Funny Short Saying ~

I am nobody. Nobody is perfect. Therefore I am perfect.
~ Funny Short Saying ~


Without Human Stupidity the World Would Probably Be a Better Place
... but Probably Also a Lot Less Fun

Let's not stop the rich fountain of funny quotes by famous people when they are so good!

Here are some funny quotes about stupidity:

Two things are infinite: the universe and human stupidity; and I'm not sure about the universe.
~ Albert Einstein ~

The only way to comprehend what mathematicians mean by infinity is to contemplate the extent of human stupidity.
~ Voltaire ~

The difference between genius and stupidity is that genius has its limits.
~ Albert Einstein ~

When it comes to thought, some people stop at nothing.
~ Funny Short Saying ~

Here are some funny quotes about television:


I find television very educating. Every time somebody turns on the set, I go into the other room and read a book.
~ Groucho Marx ~

My father hated radio and could not wait for television to be invented so he could hate that too.
~ Peter De Vries ~

Television is a medium because anything well done is rare.
~ Fred Allen ~

TV is chewing gum for the eyes.
~ Frank Lloyd Wright ~

On cable TV they have a weather channel -- 24 hours of weather. We had something like that where I grew up. We called it a window.
~ Dan Spencer ~

Television is like the American toaster, you push the button and the same thing pops up everytime.
~ Alfred Hitchcock ~ 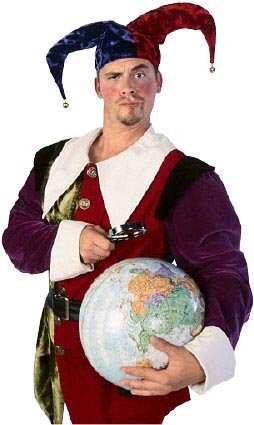 Yes, life, the universe and everything have many questions installed for us.

One question may be: Is the universe with us in it an expression of God's wit?

Now, if you don't want to be tricked by this yes or no question, just answer: 42!

Then you're on the safe side. Either you're incredibly wise or ... incredibly stupid.

And which one doesn't really matter, does it? They are so close anyway!

Here are some funny universe quotes:

My doctor says that I have a malformed public-duty gland and a natural deficiency in moral fiber, and that I am therefore excused from saving Universes.
~ Douglas Adams ~

The surest sign that intelligent life exists elsewhere in the universe is that it has never tried to contact us.
~ Bill Watterson ~

And on the eighth day God said, "Okay, Murphy, you're in charge!"
~ Funny Short Saying ~

There is a theory which states that if ever for any reason anyone discovers what exactly the Universe is for and why it is here it will instantly disappear and be replaced by something even more bizarre and inexplicable. There is another that states that this has already happened.
~ Douglas Adams ~

Duct tape is like the force. It has a light side, a dark side, and it holds the universe together.
~ Oprah Winfrey ~

God does not play dice with the universe; He plays an ineffable game of His own devising, which might be compared, from the perspective of the players, (ie everybody), to being involved in an obscure and complex version of poker in a pitch-dark room, with blank cards, for infinite stakes, with a Dealer who won't tell you the rules, and who smiles all the time.
~ Terry Pratchett ~

The ships hung in the sky in much the same way that bricks don't.
~ Douglas Adams ~

In answer to the question of why it happened, I offer the modest proposal that our Universe is simply one of those things which happen from time to time.
~ Edward P. Tryon ~

There is only one immutable law in life - in a gentleman's toilet, incoming traffic has the right of way.
~ Hugh Leonard ~

Middle age is when your age starts to show around your middle.
~ Bob Hope ~

As you get older three things happen. The first is your memory goes, and I can't remember the other two...
~ Sir Norman Wisdom ~

By the time you're eighty years old you've learned everything. You only have to remember it.
~ George Burns ~

The hardest years in life are those between ten and seventy.
~ Helen Hayes ~

When I was young I was called a rugged individualist. When I was in my fifties I was considered eccentric. Here I am doing and saying the same things I did then and I'm labeled senile.
~ George Burns ~

Older people shouldn't eat health food, they need all the preservatives they can get.
~ Robert Orben ~


Hilarious Quotes about Men and Women

Sometimes we come to think that putting men and women together in the same universe must be God's idea of a great joke.

Here are some hilarious quotes about men and women:

The male is a domestic animal which, if treated with firmness and kindness, can be trained to do most things.
~ Jilly Cooper ~

I'm an excellent housekeeper. Every time I get a divorce, I keep the house.
~ Zsa Zsa Gabor ~

When women are depressed they either eat or go shopping. Men invade another country.
~ Elayne Boosler ~

You know, somebody actually complimented me on my driving today. They left a little note on the windscreen, it said 'Parking Fine.'
~ Tommy Cooper ~

If everything is coming your way you're in the wrong lane!
~ Funny Short Saying ~

If God wanted us to bend over he'd put diamonds on the floor.
~ Joan Rivers ~

I have never been jealous. Not even when my dad finished fifth grade a year before I did.
~ Jeff Foxworthy ~

I've been on a calendar, but I've never been on time.
~ Marilyn Monroe ~

A celebrity is a person who works hard all his life to become well known, then wears dark glasses to avoid being recognized.
~ Fred Allen ~

I like long walks, especially when they are taken by people who annoy me.
~ Noel Coward ~

The elevator to success is out of order. You'll have to use the stairs... one step at a time.
~ Joe Girard ~

Tragedy is when I cut my finger. Comedy is when you fall into an open sewer and die.
~ Mel Brooks ~

The first law of dietetics seems to be: if it tastes good, it's bad for you.
~ Issac Asimov ~

When in doubt, make a fool of yourself. There is a microscopically thin line between being brilliantly creative and acting like the most gigantic idiot on earth. So, what the hell, leap!
~ Cynthia Heimel ~