The English translation of the Alabama state motto: "We Dare Defend our Rights" or "We Dare Maintain our Rights" is derived from a poem by 18th century author Sir William Jones:

"What constitutes a state? . . .
Men who their duties know,
but know their rights,
and knowing, dare maintain."

Marie Bankhead Owen, Director of the “Alabama Department of Archives and History” was the one who came up with the idea of using Sir William Jones' poems as inspiration for the Alabama state motto when she was searching for an appropriate design for the Alabama coat-of-arms.

Contrary to many Latin mottos this motto did not start out as Latin but initially came about in the English language ("We Dare Defend our Rights"), then was later translated into the Latin motto: "Audemus jura nostra defendere" by W. B. Saffold, a Professor at the University of Alabama.

The motto of Alabama may be said to reflect justice, freedom and independence - values it shares with many other U.S. state mottos.

Whereas there is only one motto, there exist a number of state nicknames for Alabama:

"The Cotton State"
The state of Alabama is placed in the middle of what is referred to as the "Cotton Belt". Cotton is one of the main pillars of Alabama's agricultural industry. In state statistics, Alabama ranks between eight and ten in national cotton production for the USA.

Whereas the motto of Alabama intends to describe the 'soul' of Alabama with patriotism at heart, Alabama state slogans focus especially on attracting tourists and as you will see, some slogans are more serious in nature than others:

"Share the Wonder"
The official website of Alabama Department of Conservation and Natural Resources uses this Alabama state slogan.

"Alabama the Beautiful"
From the "Alabama Official 2007 Vacation Guide"

"Sweet Home Alabama"
Most people recognize this expression from the famous song or movie by the same title. However, it is also the slogan for the official travel and tourism website for the State of Alabama: Alabama.Travel

"Alabama: At Least We're not Mississippi"

"Alabama: No Shoes, No Shirt, No Problem"

"Alabama: Yes, We Have Electricity"

"Alabama: Like the Third World, but Closer!"
~ Jim Villani ~

"The Cotton Plantation State"
Cotton being central state crops, farmers in Alabama have suffered when important cotton productions failed: For instance, in the early 1900s poor cotton harvests had widespread effect on farmers and their living.

"The Heart of Dixie"

Among one of the most popular Alabama State Nicknames is "The Heart of Dixie". This state nickname has been part of the design on Alabama car licence plates since 1955. "The Heart of Dixie" also has a thread going back to the state's role in the South and the Civil War.

The origin of the expression dates back to somewhere between the 1940s or 50s when the Alabama Chamber of Commerce felt a calling for a more characteristic state nickname than the" Cotton State", as Alabama is not the only state producer of this crop.

"The Yellowhammer State"
There are two different explanations to the origin of this Alabama state nickname. Both have their root in the Civil War:

"The Lizard State"
In early times, the streams of Alabama were home for a variety of lizards. 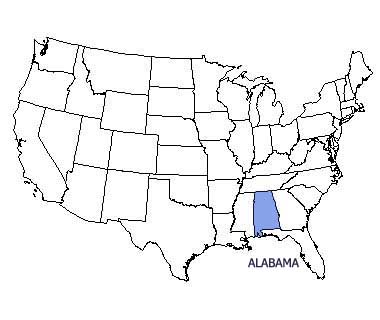 Back to the top of this page about Alabama State Motto