The Arkansas state motto is one of the many Latin mottos of U. S. states. This Latin motto means "The People Rule". Historic sources have had a difficult time tracing the motto's origin so it is not known how it came about.

Whereas there is only one Arkansas motto, there exist a number of state nicknames for Arkansas:

"The Natural State" (Official)
This Arkansas state nickname was officially adopted by legislature in 1995 and is intended to emphasize Arkansas' beautiful landscape and relatively untouched nature. Within Arkansas you will find a true wealth of parks - 3 national forests, 5 national parks and a whole of 52 state parks.

"Land of Opportunity"
This is another one of Arkansas state nicknames which was adopted in 1947 as the official nickname of Arkansas. It remained that way for 38 years.


"The Wonder State"
Going further back in time, this state nickname had official status from 1923-1947 and was intended to promote Arkansas' richness in natural wonders.


"The Bear State"
Even further back, we find "The Bear State" (pronounced "Bar") which was first heard in 1958. This Arkansas state nickname was later abandoned as it was found unfitting for the state.


"The Hot Springs State" or "The Hot Water State"
These two variations of Arkansas state nicknames were earned because of the popular hot springs in Arkansas.


"The Razorback State"
The background for this nickname is an honouring of the athletic teams of the University of Arkansas. A razorback is a wild hog with thin long legs.


"The Bowie State"
This is another reference to a knife. This particular type was first made by smith James Black for Jim Bowie. The knife was supposedly sharp enough for shaving, heavy enough to be handled as a hatchet, as long as a sword, and broad enough to be able to paddle with.


Whereas the Arkansas state motto intends to describe the national 'soul' of Arkansas, Arkansas state slogans focus especially on attracting tourists, and as you will see, in both serious and funny ways:

"Arkansas. The Natural State"
This is one of the Arizona State slogans from the Official Arkansas Tourism site - The Arkansas Department of Parks & Tourism: Arkansas.com

"Arkansas: Safe Sex, We Mark the Sheep that Kick"

"It's All Relative in Arkansas"

"Arkansas: Where Your Daddy is Your Uncle"

"Arkansas: We Pluck a Mean Chicken"

Some of these Arkansas funny state slogans are printed on souvenir t-shirts and other souvenir items. 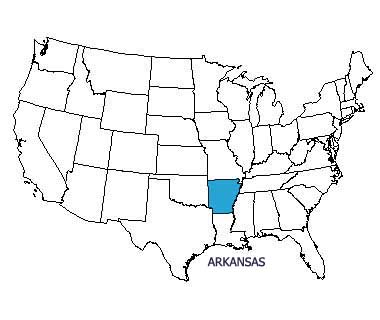 Back to the top of this page about Arkansas State Motto