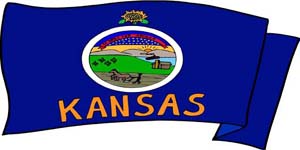 The Kansas state motto is Latin and means "To the stars through difficulties". The Kansas motto appears both on the state flag and state seal.

The Office of the Governor of Kansas conveys the following about the Kansas motto:

In this way the Kansas motto may be seen to emphasize important values such as optimism and will force even when faced with hardships.

Another note about the Kansas state motto is written by Robert Hay in The Great Seal of Kansas, in the Transactions of the Kansas Historical Society, 1903-1904, vol. 8:

"The idea represented by the motto itself is very old and occurs frequently in classical poetry, in German set phrases and quotations, and in feudal mottoes of the European nobility."


Whereas there is only one Kansas motto, there exist a number of state nicknames for Kansas:

"The Sunflower State" (Official)
This Kansas state nickname stems from the blossoming of wild sunflowers which is a beautiful sight that meets the eye when visiting Kansas.

"Garden of the West" or "The Garden State"
Kansas has a spectacularly lush landscape due the richness and fertility of the soil.


"The Wheat State"
In the year 2000 Kansas was number one in the agricultural area of wheat production and wheat flour milled and milling capacity.

"The Grasshopper State"
This version of Kansas state nicknames stems back to 1874 when Kansas was subject to a gigantic swarm of grasshoppers (Rocky Mountain Locusts) that left the landscape denuded. Fortunately Kansas quickly came back on its feet and in the following year presented the largest corn harvest ever seen in Kansas' history.


"Midway, U.S.A." or "The Central State"
These Kansas state nicknames refer to the geographic centre of the Continental United States being located within the state. A stone monument in the town Lebanon marks this precise location.


"Bleeding Kansas" or "The Battleground of Freedom"
In the years up to the Civil War, the Kansas territory became a battleground for pro-slavery and anti-slavery activists. These bloody conflicts are the backgrounds for both of these Kansas state nicknames.


"The Squatter State"
When Kansas was a new territory, settlers from Missouri flocked in to make claims to the land. Missouri pro-slavery squatters formed the Squatters' Claim Association in 1854 to ensure their own claims to the territory and at the same time prevent emigration from the northern anti-slavery states such as New England.


"The Jayhawk State" or "The Jayhawker State"
This nickname arose in the time of the conflicts between Kansas and Missouri in the years leading up to the Civil War.

An Irishman, Pat Devlin, explains why he was participating in raids that crossed the Missouri border: "You know, in Ireland we have a bird we call the Jayhawk, which makes its living off of other birds. I guess you might say I've been Jayhawking!"

The term "Jayhawk" may have referred to both Kansans and Missourians, but with time was only associated to Kansans. Missourians were called "Bushwhackers"

Whereas the Kansas state motto intends to describe feelings attached to certain difficult moments of Kansas history: "To the stars through difficulties" - Kansas state slogans focus especially on attracting tourists, and as you will see, in both serious and funny ways:


"There's No Place Like Home"
This Kansas state slogan is a reference to book 'The Wonderful Wizard of Oz' by L. Frank Baum. When Dorothy clicks her heals three times and says "There is no place like home," she returns to Kansas.


"Kansas, as big as you think" ("Kansas: Simply Wonderful")
This is the Kansas slogan from The Official State of Kansas Travel and Tourism Web Site: TracelKS.com


"Land of Ahhs"
Once again a reference to 'The Wonderful Wizard of Oz'. "Ahhs" is pronounced "Oz"


"Kansas: First Of The Rectangle States"

"Kansas: Stupid is the New Smart"

"Kansas: We Know We're Flat (And We're Very Self-conscious About It)"

"Kansas: Not Everything is Flat"

Some of these Kansas funny state slogans are sold on t-shirts and other souvenir items. 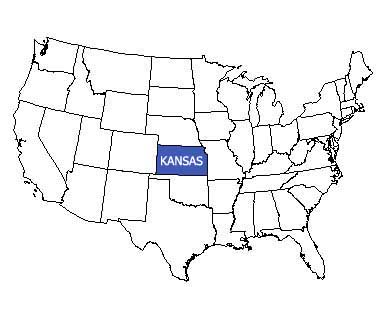 Back to the top of this page about Kansas State Motto