The Montana state motto is a Spanish motto and in English it means "Gold and Silver" and was selected at the same time as the territorial seal for the state of Montana back in 1865.

There is actually a rather funny story behind the adoption process of the Montana state motto. The initial motto suggestion was in somewhat poor Spanish "Oro el Plata" - fortunately later, someone with a bit more linguistic talent in Spanish spotted it, and corrected it to "Oro y Plata".

A competitive suggestion to the Montana state motto, "Oro y Plata", was another 'golden' expression, "El Dorado" ('place of gold' or 'golden one' - "El Dorado" is also a popular reference to a mythical land of great wealth and fortune).


Whereas there is only one Montana motto, there exist a number of state nicknames for Montana:


"The Treasure State"
This popular Montana state nickname goes all the way back to 1895 and is a reference to Montana's rich mineral resources (just like the Montana motto), particularly that of the greatly desired gold and silver. The findings of these treasured metals secured some lucky settlers' instant wealth in the mid 1800s.

Besides these well sought metals, sapphires are also valuables that Montana's mountainous nature offers. This Montana nickname "Treasure State" was presented as a proud feature on the state's license plates from 1950-1966.

"Big Sky Country"
This Montana state nickname was presented at the 1962 promotion of the Montana State Highway Department. The origin of the nickname stems from a book by Alfred Bertram Guthrie Jr. "Big Sky" which was suggested by a highway employee.

"Big Sky Country" replaced the initial "Treasure State" on the state license plates and was displayed from 1967-1975. From 1976-2000 the nickname was abbreviated to "Big Sky".

"The Bonanza State"
Bonanza is originally a Latin word that means 'bonus' or 'good'. In spoken language today, if you 'hit or struck a bonanza', you've found a rich ore of something valuable or you have encountered an event that will bring you good fortune. In this way, the Montana state nickname is another reference to Montana's richness in minerals.


"The Mountain State"
This nickname speaks for itself. Montana is mountainous.


"Land of Shining Mountains"
This Montana state nickname was 'invented' in the same year as "The Treasure State" (1895). Both Montana nicknames come from an advertising booklet made by the Montana Bureau of Agriculture, Labor, and Industry.

Apparently the nickname "Land of Shining Mountains" originated with two French Canadian fur traders who, when taking in the spectacular view of the mountains, referred to them as the "Shining Mountains".

Supposedly, Native American tribes were to also have referred to the mountains as "shining" because of the shiny reflections made by the glittery snow of mountain peaks.


"The Stubbed-Toe State"
'Watch your foot'... the terrain of Montana is rough and mountainous. This nickname presents a 'funny' warning to inexperienced hikers. The nickname first appeared in the "World Almanac" in 1922.


"The Headwaters State"
The mountains of Montana are the origin of many water and river systems, for instance the Missouri and Colombia have their origin in Montana's Rocky Mountains.

Whereas the Montana state motto intends to capture the 'rich soul' of Montana in both concrete and figurative terms - Montana motto: "Gold and Silver" - Montana state slogans focus especially on attracting tourists, and as you will see, some Montana slogans are more serious in nature than others:


"Montana: High, Wide and Handsome"
This is an old Montana slogan which was first seen in the "Montana Highway Department" brochure from 1940.


"Montana - Naturally Inviting"
This Montana state slogan is from 1985.


"Montana - Unspoiled, Unforgettable"
This Montana state slogan is from 1988 and was adopted by the State Tourism Advisory Council.


"Montana: Land of the Big Sky, the Unabomer, and Very Little Else"

Some of these Montana funny state slogans or tasteless Montanan state slogans (depending on your sense of humour) may be bought on souvenir t-shirts and the like. 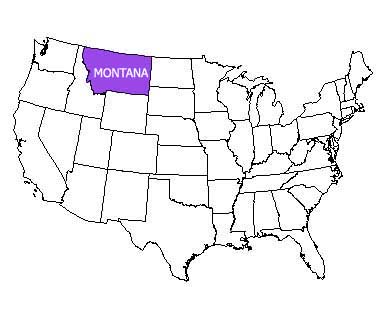 Back to the top of this page about Montana State Motto