According to the historical writer, Howard M. Chapin, the biblical phrase "hope we have as an anchor of the soul" is considered the main inspiration and background for the Rhode Island motto "Hope".

Why the exact choice of "Hope" was selected to represent the Rhode Island motto, is not known, however.

Other state mottos that similarly to the Rhode Island state motto mention or refer to sentiments of 'hope' are South Carolina and Washington.


Whereas there is only one Rhode Island state motto, there exist a number of state nicknames for Rhode Island:


"The Ocean State" (Official)
This is the official Rhode Island state nickname and was created in an attempt to attract tourists to the state. If you have a car, you don't have to drive for more than half an hour max to reach the sea.


"The Smallest State"
Another reference to size, Rhode Island is the smallest of all the 50 states.


"The Southern Gateway of New England"
This name places emphasis on Rhode Island's geographical location as being very convenient for shipping goods between New England and other parts of the United States and other countries.


"Land of Roger Williams"
This is a Rhode Island nickname in honour of the founder of Providence Plantation in 1636, Roger Williams.

"Rhode Island: It's Like the Period at the End of a 49 Word Sentence"

Some of these Rhode Island funny state slogans can be bought on t-shirts and other souvenir items. 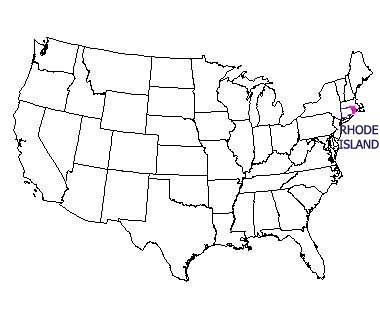