The North Carolina state motto is a Latin motto which in English means "To be, rather than to seem".

The North Carolina motto was adopted in 1893 which is rather late. In fact, North Carolina was the only state out of 13 states at that point that did not have a state motto.

In this way North Carolina did not follow many other states' examples of using the declaration of independence to lift up the national spirit and create a patriotic North Carolina motto.


Whereas there is only one North Carolina state motto, there exist a number of state nicknames for Carolina:

The North Carolina nickname "The Old North State" is also the title of the official state song which was adopted in 1927.


"The Tarheel State"
When North Carolina was still a young state, tar (a sticky mixture of wood, coal, and peat) was one of the state's greatest industrial products.

There are two different legends that lay claim to the origin of this North Carolina nickname - one common theme in the legends is the Civil War:

In the subsequent exchange of compliments the North Carolinians were greeted with this question from the passing Virginian derelict regiment: "Any more tar down in the Old North State, boys?" Quickly they replied: "No, not a bit; old Jeff's bought it all up." "Is that so; what is he going to do with it?" was the question back "he is going to put it on your heels to make you stick better in the next fight."


"The Turpentine State"
Along with tar and pitch, turpentine from the many pine forest was one of North Carolina’s main products.


"The Land of the Sky"
This North Carolina nickname comes from Frances Fisher Tieran’s (pseudonym Christian Reid) book “The Land of the Sky” from 1876 with references to the Great Smokey Mountains and the Blue Ridge.


"First in Flight"
North Carolina and Ohio played a significant, but contestant role in the history of flight. The Wright brothers built their design in Ohio and flew their first flight in North Carolina.


"North Carolina: Tobacco is a Vegetable"

Some of these North Carolina funny state slogans may be bought on t-shirts and the like. 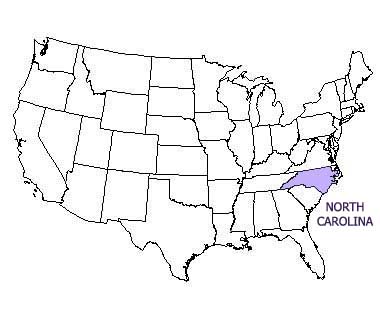