The Delaware state motto was formed in 1783 by the Society of the Cincinnati. It was adopted in the year of 1847 and it appears on both the state flag and state seal.

The underlying message inherent in the state motto refers to Delaware's prominent role in United State's great fight for independence and struggle for freedom.

In 1847 the Delaware motto was added to the seal "...as an expression of the ideals of American government...".

In this way "Liberty and Independence" became a cultural expression of Delaware's patriotic identity. The patriotic message of the Delaware state motto is very typical of American state mottos in general.


Whereas there is only one Delaware motto, there exist a number of state nicknames for Delaware:

The Delaware motto refers to the fact that in 1787, Delaware became the first of the 13 original states to ratify the United States Constitution.


"The Diamond State"
The origin of this Delaware state nickname goes back to Thomas Jefferson who flatteringly compared Delaware to a diamond: 'small in size but high in value'. Jefferson also said about the state of Delaware that is was: "... a 'jewel' among states due to its strategic location on the Eastern Seaboard."

"Uncle Sam's Pocket Handkerchief"
This one of the Delaware state nicknames is most likely another reference to Delaware's small size.


"The Corporate Capital"
The attractiveness of the business law of Delaware has resulted in a high number of corporations wanting to incorporate in Delaware.

The Delaware Division of Corporations (2002) states among other things that 308,000 companies are registered in Delaware and that this is 50% of the companies listed on the New York Stock Exchange.


"The Blue Hen State" or "Blue Hen Chicken State"
These two Delaware state nicknames go back to an event during the Revolutionary War when cock fights were highly prized as popular events. The chickens used here had rare fighting abilities and were said to be descendents from a particular famous Blue Hen.

Once in a particular memorable cockfight, a soldier was to have cried out: "We're sons of the Old Blue Hen and we're game to the end" - comparing the strength and fighter skills of the cock to that of the Delaware soldiers.


"New Sweden"
Several centuries ago Delaware was ruled by Sweden from 1638-1655.


"The Peach State"
With the arrival of the peach to Delaware in the 1500s, no one would have anticipated the scope of its success. It so happened that peaches fitted so well to the environmental conditions that by the 1600s, farmers have such plenty supply of peaches that they used them to feed their pigs.

In the early 19th century Delaware was in the lead of peach production in the U.S. However, in the latter part of the century "yellows", the peach blight, almost caused a complete stop in the production and farmers relying on peaches had to fight for survival.

"Small Wonder"
This is a relatively recent Delaware nickname. What Delaware lacks in size, the state makes up for in natural beauty.


"The Chemical Capital"
Delaware is viewed as being in the top with regards to chemical research.

"Delaware: It's Good Being First. The first State"
This is the slogan made by the state of Delaware. It is a reference to Delaware being the first state to ratify the Constitution: VisitDelaware.com


"Smaller, Faster, Smarter"
This is another one of the Delaware state slogans. It is a reference to Delaware's effective education system: Small programs, fast degrees, and smart teachers.


"Delaware: Wow..... You're in Delaware"
No comments seem necessary.

"Home of Tax Free Shopping"
This is another Delaware state slogan made by the state: VisitDelaware.com

"Delaware: We Really Do Like the Chemicals In Our Water"

Some of these Delaware funny state slogans can be bought on various souvenir items such as t-shirts and the like. 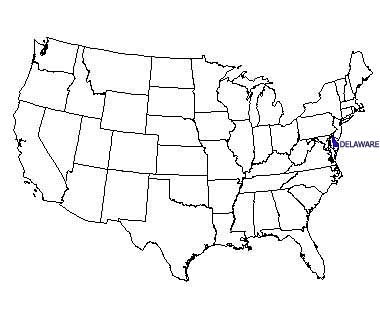 Back to the top of this page about Delaware State Motto