• Random funny stuff galore; hand picked for your entertainment.
• From funny road signs to dirty pick up lines to one liners insults ...
• ... to funny stupid questions to funny campaign slogans - and more
• Enjoy! :-)

All Sorts of Random Funny Stuff for You

Chances are if you've got a sense of humor, particularly if it's a slightly twisted one, you see humor in a lot of places where others really don't.

Like, for instance, the lawyer who - probably without a second though - named his daughter Sue.

Or the mother who would swear at her later-to-be-famous son (funny quote):

My mother never saw the irony in calling me a son-of-a-bitch.
~ Jack Nicholson ~

Yes, fun's everywhere! And that's what this page is all about.

While road signs are usually pretty boring, funny road signs do exist. Allow us to present you with a few ...

The first of the funny road signs is from Norway in Scandinavia (the neighbor to the North of Quotescoop.com's home country of Denmark). In Norway there's a town with a name that's not all that strange in Norwegian, but rather noticeable in English. And since Norway is pretty cold in the winter, well, sometimes it freezes over ... 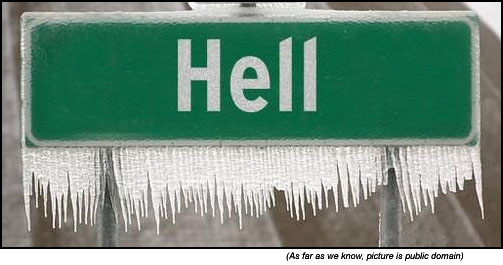 The second of the funny road signs we'd like to show you is this one: 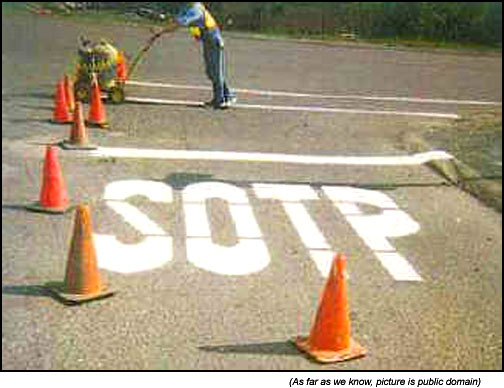 The third of the funny road signs we'd like to show you is this priceless one: 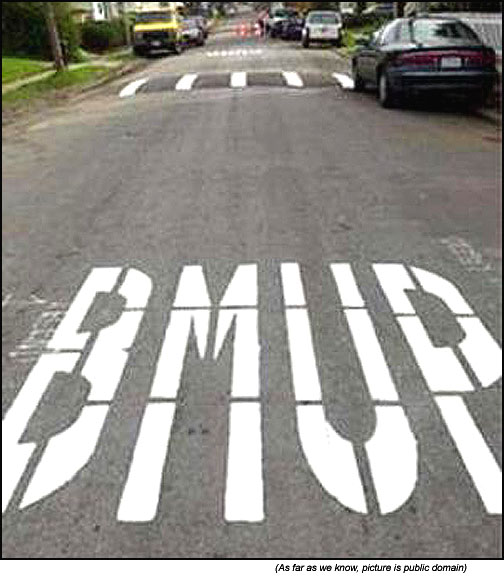 And here's the fourth and last of the funny road signs we'd like to share with you. This one MUST cause some confusion: 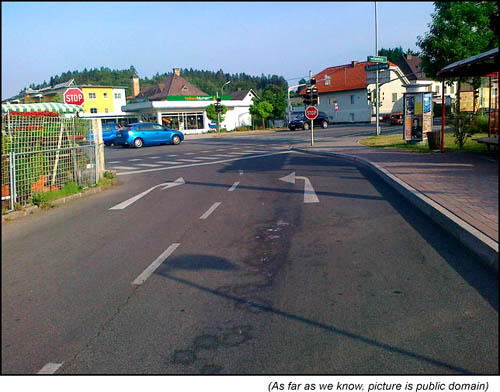 If you want more funny signs, you're welcome to visit the pages of Funny Road Signs, Funny Traffic Signs and Funny Street Signs

What beats the online world for laughter? The Internet offers us a place to find all that we need for information as well as everything we could possibly want for random funny stuff and hilarious situations.

Some of the most hilarious things that we see around the Internet these days are the social networking pages. Very often people tend to forget where they are in cyberspace and the fact that the entire world is reading what they had to say - or what they do ...

Here's a hilarious description of events, taken from Facebook:

- Day One, Jennifer is in a relationship with Matt

- Day Two, only four hours later, Jennifer is in a relationship with Jeremy

- Day Four, Jennifer is in a relationship with Andrew.

Well, WOW... :-) It seems Jennifer has enough problems that we can safely forget about our own. Wonder if she was succumbing to some of those funny pickup lines that we see around the Internet.

Like this one, in the cute end of the scale:

"I lost my teddy bear. Will you sleep with me?"

Or this couple, in the not-so-cute end of the scale:

"Screw me if I am wrong, but haven't we met before?"

"Hi. My name's Robert. That's so you know what to scream in bed."

Or this, slightly silly one:

"Do you have any raisins? No? Well, how about a date, then?"

Of course, you can always reply to those stupid pick up lines by using a funny put down, one of the many one liners insults that exist:

"Have a lovely day, preferably somewhere else."

"If I throw a stick will you leave?"

"If you are in touch with reality at all, it's a really bad connection."

"Tell you what. If you keep this up I will worship the quicksand you walk on."

"Wow. Several million sperm and YOU're the one that made it?!"

Speaking of silly exchanges that have taken place between people, and which are now immortalized on the Internet, you might Try this exchange from the doctor's:

Doctor: "I think you should stop taking sleeping pills every night. You may get addicted to them."

Woman: "Don't be silly. I've been taking them every night now for 20 years and they haven't become a habit yet."

Or this exchange, which takes place in the home of a woman who is getting more and more suspicious that her husband might be having and affair, and finally speaks to her maid about it.

Wife: "I have a suspicion that my husband might be having an affair in his office."

Maid: "Go on! You're only saying that to make me jealous!"

Or, maybe an old Texas saying might amuse you: "If you can't dazzle them with your manliness, riddle them with bullets!"

Life's a funny thing. Funny facts, bizarre facts and weird facts abound. For instance, did you know that the first Earth born fish to go into space was a small South American Guppy? It spent 48 days in space on board the Russian space craft Saljut 5.

Also, it may sound weird, but the lighter was actually invented before the matches. Back in the 16th century folks converted flintlock pistols that used gunpowder into lighters, and in 1823 Johann Wolfgang Döbereiner invented the modern lighter that used gas.

Friction matches, on the other hand, were invented by John Walker in 1826 - quite by accident. He never bothered to protect his invention by patent.

It's weird facts like these, you JUST can't live without, right? Riiight.

If you're more into funny facts perhaps you want a list of foods that contain a large percentage of a kind of sugars (oligosaccharides) which our body can't really digest, and which we therefore rely on certain gas producing bacteria in our intestines to deal with?

Well, to put it plainly these are the no. one FART PRODUCING foods:

That may have been one of the motivations behind this (in)famous short funny campaign slogan:

And now that we're at the commercials. Here's one we really like. It's one of those hilariously funny videos clips, but please notice that it is not suitable for people who try to be politically correct ...

And here's a more regular one from our secret collection of U Tube Funny Videos. It's one of many, many funny cat videos, this one featuring a cat flicking it's tongue and wondering what all the human commotion around it is all about ...

Returning to the social networking sites; they can be fantastic places to find funny stuff that will not only give you a good laugh, but also make you thank your lucky stars that it's not YOUR mom who's posting those private messages and making them accidentally public:

From the Epic Facebook Fail section, here's an online 'conversation' between Kathy and Greg:

Kathy: It seems you have no desire to be part of our family since the divorce between your father and myself but I have a friend who helped me to find you on the Facebook so that I can at least talk to you.

Greg: I think you may have the wrong person. I am not your son.

Kathy: Just because we are divorced does not mean you are not my son. Your father is not a better parent than me and I raised you pretty much without his help so tell that slimy step mother of yours that she is not your mother, I am.

Kathy: Just because your father bought you a ton of toys and gave you things instead of being there does not mean you should not keep in touch with me and with your grandmother who is incidentally in the hospital right now.

Greg: Uh, yeah, so I was not kidding. I'm really not your son, but I did check out other kids with the same name at my school and I think this may be him. Good luck with all that other stuff, but please don't write to me again. We are not related.

We really have to thank these good people for tickling our funny bones by not putting their 'dirty laundry' into private messages, but rather giving the rest of us a chuckle or a laugh.

Yeah, there is nothing like the online world for random funny stuff. On the Internet logical people wonder ...

If an orange is orange, why isn’t a lime called a green or a lemon called a yellow? 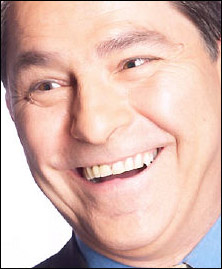 If electricity comes from electrons, does morality come from morons?

What Quotescoop.com is innocently wondering, however, is if you know the answer to funny stupid question:

Why did the squirrel swim across the river on his back?

Because he didn't want to get his nuts wet.

Here's another fun fact that may make you smile: Have you noticed that in many advertisements for analog watches the time displayed on the watch is 10:10? Well, that's because the arms then frame the brand of the watch ... and make it look like the watch is smiling.

Speaking of what makes us tick, the company Big Ben Clocks may have paid a fortune to some marketing guy to come up with this rhyming, but strange campaign slogan:

Timex, on the other hand, created this decently funny, rhyming campaign slogan:

"Takes a licking and keeps on ticking."

Yeah, big money can make for big laughs, too. Unfortunately they don't do that all that often.

Big companies have created both ingenious and very stupid ways to make us laugh and remember their product with funny campaign slogans. Here's one from Alka Seltzer:

And one from Meow Mix Cat food:

"Tastes so good cats ask for it by name."

Mohara Suits, on the other hand, may have inadvertently shot themselves in the proverbial foot with this one that probably won't make too many men spend money on their garments:

And finally one you have to judge for yourself, from Electrolux vacuum cleaners:

And, since we don't want to go out with a commercial (we have other pages for that, like The Best Funny Ads), we're going to wrap this page up with a random funny joke for you:

A woman walks up to an old man sitting in a chair on his porch.

"I couldn't help but notice how happy you look," she said. "What's your secret for a long, happy life?"

"Well, I smoke three packs of cigarettes a day, drink a case of beer, eat lots of fatty foods, and never, ever exercise," he replied.

Back to the top of this page about Random Funny Stuff: Funny Road Signs, Dirty Pick Up Lines, One Liners Insults, etc.