Best Short Jokes Ever
and Really Funny One Liners

• Here is a collection of the best short jokes ever - carefully handpicked for your delight!
• On this page you will find hilarious condom jokes, sharp tax jokes, mind jokes, pain jokes, truth jokes, time jokes, police jokes and marriage jokes!

• Let's wait no further and jump head first into the pool of fun!

- Don't let your affection give you an infection. Put some protection on that erection.

- To reuse a condom, turn it inside out and shake the f*ck out of it!

- Condoms should be used on every conceivable occasion.

- What do condoms and cameras have in common? They both capture the moment.

- What do you do with a year's worth of used condoms? Melt them, turn them into tire and call it a goodyear.

- What did the penis say to the condom? "Cover me I'm going in!"


Taxing Jokes That Won't Wear You Out
~ Tax Jokes

- It used to be only death and taxes were inevitable. Now, of course, there's shipping and handling, too.

- Lottery: A tax on people who are bad at math.

- If a tax man and a lawyer were both drowning and you could only save one, would you go to lunch or read the paper?

- What do cannibal tax advisors do after their office Christmas dinner? Toast their clients!

- Taxes: Of life's two certainties, the only one for which you can get an automatic extension.

- People often say death and taxes are the same, but this is wrong. Death is a taxable event, but taxes never die.

- IRS: We've got what it takes to take what you've got.


Short Jokes That Will Blow Your Mind
~ Mind Jokes

- I just let my mind wander, and it didn't come back!

- I used to have an open mind but my brains kept falling out!

- A penis has a hole in the end so men can be open minded.

- A prostitute with a degree in psychology will blow your mind.

- Don't confuse an open mind with one that's vacant.

- I don't remember being absent minded.

- I live in my own little world, but it's ok, they know me here. 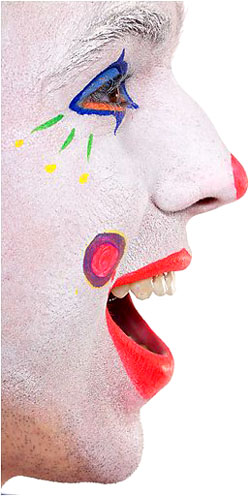 Warning: Really Funny One Liners ... They Will Hit You Hard
~ Pain Jokes

- The beatings will continue until morale improves.

- I wondered why the baseball was getting bigger. Then it hit me.

- I can handle pain until it hurts.

- A dentist and a manicurist fought tooth and nail.

- No matter where you go, you're there.

- The hardness of butter is directly proportional to the softness of the bread.

- Everywhere is walking distance if you have the time.

- To write with a broken pencil is pointless.

- On the other hand, you have different fingers.

For more short funny jokes on at related topic see Truths You Never Knew, You Were Never Going to Miss on the page Short Hilarious Jokes.

- How long a minute is depends on what side of the bathroom door you're on.

- Time is the best teacher, but it kills all its students.

- A dry cleaner who is in a hurry for a date, will be pressed for time.

- It is easier to get older than it is to get wiser.

- Some people ask the secret of our long marriage: We take time to go to a restaurant two times a week. A little candlelight dinner, soft music and dancing. She goes Tuesdays, I go Fridays.

- Police were called to a day care where a three-year-old was resisting a rest.

- A thief who stole a calendar got twelve months.

- A thief fell and broke his leg in wet cement. He became a hardened criminal.

- Thieves who steal corn from a garden could be charged with stalking.

- The only animal with an asshole in the middle of its back is a police horse.

- A women was found in her home in her bath tub surrounded by milk with a spoon up her pussy and a banana up her arse. Police suspect a cereal killer.

- Police will arrest a transvestite, and charge him with male fraud.

- A crate load of Viagra has been stolen from a distribution depot - police are looking for hardened criminals.

- A policeman spots a woman driving and knitting at the same time. Driving up beside her, he shouts out the window... "Pull over!"

- Love may be blind but marriage is a real eye-opener.

- Marriage is like a bank account. You put it in, you take it out, you lose interest.

- Marriage is like taking a bath... after you've been in it for a while, it isn't so hot.

- A diplomat is a man who can convince his wife that a fur coat will make her look fat.

- A wise man buys his wife fine china, so she won't trust him to wash it.

- When a man steals your wife, there is no better revenge than to let him keep her.

- I asked my wife if she enjoys a cigarette after sex and she said, "No, one drag is enough.

- My wife is always talking about a trip to Europe. I have no objections - I let her talk.