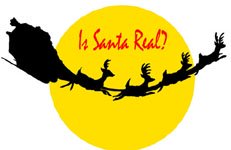 • Does Santa Claus exist? Is Santa Claus Real?
• Kids all over the world want to know!
• It may just be one of the big philosophical questions in life ...

This page is an entry in "Funny Life Quotes & Stuff: The Quotescoop.com Inspiration Blog" - a blog aimed at your entertainment, inspiration and empowerment. This inspirational, motivational blog is based on fun, truth and empowerment theory, and it incorporates inspirational sayings, bizarre facts, funny unanswered questions, really funny jokes, random funny stuff and more!

Is Santa Claus real? Nobody (apart from a very few, select people) knows, but a lot of people do a lot of believing.

Who is right? The young folks? The old folks? Neither? Both?

Does it even matter?

Quotescoop.com has done some research and some thinking and a tiny bit of guessing, and if you read this article you'll find out more, so you can judge for yourself.

There's nothing sadder in this world than to awake Christmas morning and not be a child.
~ Erma Bombeck ~ 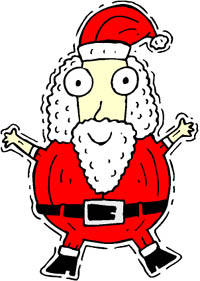 Santa Claus is an overweight Caucasian guy with a long white beard, dressed in funny red clothes who is fond of children. No, not in the nasty way - not as far as Quotescoop is aware. He just loves to give children presents and does so every Christmas eve.

I never believed in Santa Claus because I knew no white dude would come into my neighborhood after dark.
~ Dick Gregory ~

... that' he's alive and drunk in Philadelphia. However, the same thing has been said about Elvis and W.C. Fields, respectively, and look how true THOSE rumors turned out to be!

So let' rule that rumor out right from the beginning, shall we, and look at some much more interesting rumors - and facts! The question 'Is Santa Claus real?' deserves an answer, and perhaps after reading this you can give it!

Christmas at my house is always at least six or seven times more pleasant than anywhere else. We start drinking early. And while everyone else is seeing only one Santa Claus, we'll be seeing six or seven.
~ W.C. Fields ~

Nobody knows exactly how old Santa Claus is. But he IS old, that's for sure.

Some say that before he became Santa as we know him, he may have been Saint Nicholas of Myra, a 4th-century Greek Christian bishop of Myra (now Demre) in what is now Turkey. If this is correct, Santa is approx. 1700 years old.

Surely, if he wasn't real we wouldn't STILL be talking about him?

So, how did he survive for that long? We don't know, but we presume it has something to do with the way he lives. Okay, so maybe he eats and drinks a bit much, as witnessed by his ample belly, but this only shows his great taste for all the good things in life!

We all know that Santa has a deep belly laughter which he uses a lot. (Ho, Ho, Ho!). And laughing is notoriously good for you. This has even been proven scientifically. Also, he obviously loves what he does, which is really good for your health, too. Of course not working more than one day a year and hanging out on sunny Bermudan and Thai beaches the rest of the year is probably good for you, too.

And a secret but persistent rumor has it that Mrs. Claus is in fact a 'Tantrica', a master of the art of using the physical union between two people for spiritual purposes - which is also said to be a very life prolonging practice - in addition to being rather pleasurable.

All in all we think Santa has reached his ripe old age in good health for one simple reason: He loves life!

Is Santa a real guy?

Well ... He Has Set Himself Up With a Sweet Deal

Depending on how you look at it Santa Claus has either the best or the worst job in the world.

It's like this: Since Santa employs an unspecified number of elves to help produce (and gift wrap) all the presents, he really only has to work one day a year.

According to persistent rumors Santa spends the other 364 days of the year relaxing with Mrs. Claus in his various homes and summer vacation cottages in places like North Pole, Greenland, Canada and Lapland, Finland - plus of course (less known) Thailand, Fiji and the Bahamas.

His non-polar haunts are less well known, because when recently shaved and stripped of his somewhat gaudy red robes and instead running around in sunglasses and trunks on a sunny beach, he's really hard to recognize.

Mrs. Claus is another story, of course, but since nobody (other than Mr. Claus) knows what she looks like with or without clothes, it doesn't really matter.

Well ... the Level of Stress that One Day a Year Suggests that He Must Be Resilient

So, Santa only works one day a year and has romantic getaways all over the world. Doesn't that sound ideal?

It does, but perhaps it isn't.

For one thing he's probably bored out of his skull from having nothing to do 99.5 percent of the year, and for another that one day a year is a real drag!

The one night when millions of people around the globe are having a cozy time Santa has to work his butt off.

In fact some people have claimed that if Santa was ever alive, he's dead now because of the incredible amount of stress he's under that one single day a year.

For instance Santa Claus has to bring gifts to somewhere between 100 million and two billion children (depending on whether he delivers to non-Christian children or not, and depending on how many of those children have been 'good').

(For the record: Quotescoop.com is of the opinion that all children are inherently 'good' and we believe that Santa feels the same - which of course only adds to his workload).

Even one billion gifts, though, seem like rather a lot. But the hardships don't end there.

Well ... He Does Do Logistics Really Well

The houses that Santa has to visit are scattered all over the globe.

At the equator the circumference of the Earth is 24,901.55 miles (equalling 40,075.16 kilometers). So that's quite a distance. And not all houses are placed on the equator - or indeed anywhere near it.

But Santa, for all of his old fashioned appearance, has GPS, of course.

At each house he has to squeeze his jolly, but overweight body down a narrow chimney (presuming there is one - otherwise he may have to circumvent the burglar alarm, too), eat the goods left for him, leave the presents for the kids and crawl back up the chimney (dirty, slow work) and restart his flying sleigh to go to the next house.

Just like other superheroes Santa most assuredly has a secret identity. Now we have a hint as to what it may be: On regular days he probably pretends to be a chimney sweep!

Let me see if I've got this Santa business straight. You say he wears a beard, has no discernible source of income and flies to cities all over the world under cover of darkness? You sure this guy isn't laundering illegal drug money?
~ Tom Armstrong ~

Is Santa the real deal?

Well ... He Does Have a Really Neat Sleigh 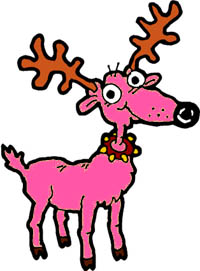 The sleigh, of course, is one tough vehicle, because it has to carry between, say, 100 million and ten billion gifts (depending on the number of children he has to give presents and how many gifts each kid gets). Assuming each present weighs about a pound on average ... well, you do the math.

And Santa himself is a real pack rat, for being able to fit all those presents into one sleigh.

Well ... He Does Keep Some Pretty Tough Company

And the reindeer are pretty tough, too, for being able to carry all that weight. Or ... there are a lot of reindeer.

Since one normal (non-flying) reindeer can pull approx. 300 pounds (approx. 136 kilos) of weight, in order to pull his sleigh with, say, 2 billion gifts (one for each kid under 18 on Earth) Santa would need between 3 and 4 million normal reindeer.

Of course Santa only has 8 to 10 reindeer total, so obviously each flying reindeer has the power of maybe half a million normal reindeer.

Think of when next you meet a reindeer with a red nose. That old Rudolph is not the kind of reindeer you'd want on your bad side!

Is Santa for Real?

Since Santa is so old he has had a lot of time to think. Thus, he has figured out that if he travels the globe the right way around (east to west) on Christmas eve, he will actually gain time because of the different time zones, giving him an effective 31 hours instead of the usual 24 hours.

This, of course, explains why so few people have in fact seen Santa Claus: he's moving too fast to be seen.

Well ... He Does Seem to Have Access to Some Really Advanced Technology

Now, under normal circumstances travelling at that speed would mean an awful lot of air resistance.

Since kids still get Christmas presents, Santa must still be operating.

So, clearly he has found a way around this problem. Quotescoop.com's best guess is: superior technology.

Now, Santa started his work many centuries ago, so the last and perhaps biggest question is this:

Where did Santa get this kind of technology at that time?

Short of asking him ourselves (which is hard, given the speed he travels at) there's no way to know. We'll just have to give an educated guess: either time travel or alien technology.

The 4 Santa Related Stages of Life!

Stage 1: You believe in Santa Claus

Stage 4: You are Santa Claus

Santa Claus has the right idea: visit people once a year.
~ Victor Borge ~

Remember, if Christmas isn't found in your heart, you won't find it under a tree.
~ Charlotte Carpenter ~

Aren't we forgetting the true meaning of Christmas?
You know ... the birth of Santa.
~ "Bart Simpson" ~

What do you call people who are afraid of Santa Claus?
Claustrophobic.

What do you call the fear of getting stuck in a chimney?
Santaclaustrophobia

Why was Santa's little helper depressed?
Because he had low elf esteem.

What does Santa call reindeer that don't work?
Dinner.

Who likes to drink reindeer milk every morning for breakfast?
A baby reindeer. 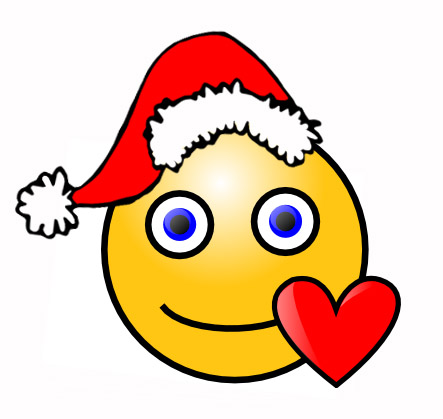 Back to the top of this page about Is Santa Claus Real? Warm Santa Humor, Jokes & Quotes