Did you ever wonder about where funny thoughts actually come from? No? Well, now you don't have to, either, because Quotescoop.com is proud to present you with the History of Crazy Thoughts and Weird, Funny Reflections. Here are a few, just to get us started:

Why is it that all the best stories stem from the most terrible decisions?
~ Funny Reflections ~

Why is the expression "between a rock and a hard place"? The rock is plenty hard! Unless, of course, you are using soft rocks.
~ Crazy Thoughts ~ 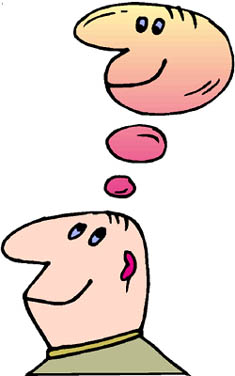 The best thing about funny thoughts is that there is such a wide variety of crazy thoughts, inspiring thoughts, funny reflections, and downright weird thoughts.

Hilarious thoughts have filled the minds of people of all ages - for ages. Humorous thoughts have ranged from simple ones like the child's joke about "pea green soup" to the more elegant, famous sayings such as these:

Until I was thirteen, I thought my name was 'shut up.'
~ Joe Namath ~

The trouble with children is that they're not returnable.
~ Quentin Crisp ~

Sometimes I lie awake at night, and I ask, 'Where have I gone wrong?' Then a voice says to me, 'This is going to take more than one night.'
~ Charles Schulz ~

Or these inspiring thoughts and funny quotes by Jack Handey:

If trees could scream, would we be so cavalier about cutting them down? We might, if they screamed all the time, for no good reason.
~ Jack Handey ~

One thing vampire children have to be taught early on is, don't run with a wooden stake.
~ Jack Handey ~

But we are getting ahead of ourselves. This is not supposed to be a page about modern funny quotes, rather it is focused on the history of funny thoughts!

Since the page you are about to read is something of a history page, we do need to bring this disclaimer: Any historical accuracy on this page is absolutely unintentional! (Though the History Book Creation People have left several messages and emails asking where they can find this same material to be added to the next issue of history textbooks to be released. Sorry, guys, trade secret!)

So please don't take offense at the historical inaccuracy you perceive (though if you insist, we can't stop you, and we wouldn't want to either, because odds are you like being offended). Who today actually knows what happened way back then, anyway? It's not like any of us - or even our great grandparents - were alive back then. They weren't even a funny thought in the, er, pants of their parents.

Instead, at least consider just having fun reading the humorous thoughts, crazy thoughts, inspiring thoughts, funny reflections, and weird thoughts we have come up with.

Oh, and if you decide to send in any humorous thoughts that you may have, hoping for 5 seconds of fame, don't be surprised if we take credit for thinking the exact same thoughts just before we read your email.


The Oldest History of Crazy Thoughts

The first funny thoughts found in history were those scrawled on a cave wall along with an anonymous cave painter. Alongside a painting of men chasing a mammoth was scrawled the words, "Why did the hunter cross the river? To get to the other side."

Yep. Such primitive humorous thoughts were the basis for other more advanced crazy thoughts like:

What do sheep count when they are unable to sleep?


What came first: the chicken, the egg, or the hot rock to make fried eggs?
~ Weird Thoughts ~

If your nose runs and your feet smell, isn't something seriously wrong with you?
~ Strange Thoughts ~

The cavemen that created those early thoughts inspired the great minds of the later centuries, particularly Hammurabi (1810 BC to 1750 BC), the sixth king of Babylon and the first king of the Babylonian Empire, who was famous for creating one of the first written codes of law ever - the 'Code of Laws of Hammurabi'.

He was, of course, somewhat less famous for the 'Giant Very, Very Funny Joke Book of Hammurabi' - which is totally undeserved. Some of his famous funny thoughts include: 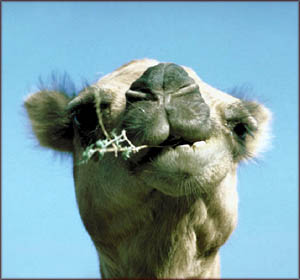 Why did the camel cross the road?
To prove to the elephant it could actually be done!

Why did the camel cross the road twice?
Because it was a double-crosser.

What time do elephants jump out of trees? Between this point and that point on the sundial. (Timekeeping had not advanced sufficiently to mark the sundial as 3 and 5 pm)

Is the reason short people are short that they go into the jungle between those same two points on the sundial?

The Giant Very, Very Funny Joke Book of Hammurabi led other famous minds to think similar funny thoughts, such as those by Marco Polo (1254-1324). Marco Polo's funny reflections all came from his trip to China, during which time some historians have speculated if maybe he inhaled way, waaay too much poppy powder:

If you spin an Oriental around, does he become disoriented?

Is there a timeframe for the predictions on a fortune cookie to come true?

Why do the Chinese throw pots down the stairs to name their children?

If laughter really is the best medicine, why do so many people say they "died of laughter"?

What do you get when you take a Chinese girl out on a date?
Chinese takeout.

Other famous inventors, philosophers, and explorers in the Western world have all not only been valued and cited for their famous quotes, they have been appreciated for their humorous thoughts as well:

Why do the winners of a game never repeat the phrase: 'It's only a game?'
... Ascribed to Leonardo Da Vinci, possible inventor of such games as Sudoku, Chinese Checkers, Midget Tossing and Catch the Flu.

If water is conductive to electricity and lightning strikes the ocean, do all the fish die? And if so, is this the origin of fish and chips? And if it is, who put the potatos in the water in the first place?
... Ascribed to Benjamin Franklin just after his discovery of electricity in lighting.

Do you wake up or open your eyes first?
... One of the less known inspiring thoughts running through Isaac Newton's mind as he sat beneath an apple tree.

Why is it called a funny bone if it hurts really bad when it is hit? Is it because it is funny to see someone dancing around holding their elbow, or is it just fun to make fun of someone when they are in pain?
... One of the humorous thoughts sometimes ascribed to Pablo Picasso and sometimes ascribed to J. F. Kennedy.

If there is a speed of sound and a speed of light, what is the speed of smell?
... One of the inspiring thoughts running through the mind of Galileo as he studied the stars after eating too many bowls of baked beans.

Some of these funny thoughts led to amazing discoveries, while others were penned down along with all the "outhouse humor" and "fornication jokes" that became so popular during the Renaissance. In fact, it is said that the Mona Lisa was smiling because Leonardo Da Vinci had just asked her "Did Noah keep woodpeckers on the ark?"

But people really in the know about Leonardo da Vinci (1452-1519), this world famous scientist, inventor, painter, architect, musician, mathematician, engineer, geologist, cartographer, botanist, anatomist and writer know full well that Mrs. Lisa was simply smiling in this devious way because Leonardo's fly was standing open as he was painting her and she was trying very hard to suppress a comment about the fact that a dead bird doesn't fall out of it's nest.


The Not Very Old (Modern) History of Humorous Thoughts

The funny thoughts of old have pushed modern man to invent such elegant devices as the Whoopee cushion and the exploding cigar - probably because someone one day thought, "Man, it would be really funny to hear someone fart as they sat down to enjoy a cigar that will explode in their mouth." For sure!

While these inventions were laughed at (yes, pun intended) in the day that they were invented, they are still being laughed at today - mostly by the same geniuses who sit around making comments about "pea green soup".

Anyways ... thanks to those thoughts through history, we now have such zingers as:

- "Your mama ..." ... which was originally conceived by Niccolo Machiavelli (1469-1527) for his second greatest work (after 'The Prince'): 'Funny Jokes and Insults for the Italian Aristocracy that Make Political Backstabbing More Palatable', and was actually in it's original form, "Your mother, too, smells like a large herbivorous creature that has an unattractive face, a broad behind and a tendency for flatulence". Thankfully, because it appeared a total of 337 times in his book, it was shortened to 'Yo mama'; and it remains short to this day.

- "That's what she said..." ... which originated in the mind of Sir Winston Churchill (1874-1965), the man responsible for such famous Churchill quotes as "If you are going to go through hell, keep going" and "A fanatic is one who can’t change his mind and won’t change the subject" plus of course his retort to Madam Braddock when she accused him of being intoxicated: "Madam, I may be drunk, but you are Winston Churchill ... or something!" - not all that inspiring as inspirational quotes go and which he later exerted his considerable political clout to make sure was changed to the following dialogue:

Bessie Braddock: "Sir, you are drunk."
Churchill: "Madam, you are ugly. In the morning, I shall be sober."

- "In your face" ... which is found in the movie 'Pie in your Face', a modern romantic comedy set in the late 1800s about a baker who finds love at the Italian court, but which was in fact originally "On my face" based on the immortal Monty Python lyrics for the song of the same name. Here's how the Monty Python lyrics for the song 'Sit On My Face' go:

Sit on my face and tell me that you love me,
I'll sit on your face and tell you I love you, too.
I love to hear you oralize,
When I'm between your thighs,
You blow me awaaay.

Sit on my face and let my lips embrace you,
I'll sit on your face and then I'll love you truly.

Life can be fine if we both sixty-nine,
If we sit on our faces
In all sorts of places
And play ... 'till we're blown awaaaaaaaay.

As is obvious from the above Monty Python lyrics funny thoughts have evolved with the passing of time and become much more elegant in this day and age; but the true essence of humorous thoughts lives on in the hearts and minds of those of us who have absolutely nothing better to do with our time.

External links to really cool websites (or, in fact, just one awesome website) with pages relevant to this page:

We have collected a whole bunch of easy-to-use links on all the famous historical persons mentioned on this page - so, all the following links go to the respective pages at content-free encyclopedia, Uncyclopedia (enter at own risk):

- John F. Kennedy, politician and the 35th President of the United States.

- A short, funny screenplay about Noah's Ark, a boat built by Noah, the tenth and last of the antediluvian Patriarchs (according to the Hebrew Bible - see the book of Genesis).

Back to the top of this page about Quotescoop's History of Crazy, Funny Thoughts & Weird Reflections