Before we generously shower you with some of the best Scrubs quotes around, here is some background information about the TV series behind the quotes.

Many famous TV quotes stick in your mind, and one of the shows that has produced some of the best famous television quotes is the hit TV series Scrubs.

Scrubs is a show based on doctors at a fictional hospital (Sacred Heart), and many of the main characters have been known for their hilarious television quotes. Many of the supporting cast have also contributed to some of the best quotes from Scrubs, and the quotes from Scrubs that are posted online tend to be entertaining and amusing.

There are many Scrubs quotes from each character of the show, but here we are only going to present the best quotes from Scrubs, as there are simply too many to count.

The following quotes from Scrubs come from the principal characters, with a few  quotes by supporting characters as well. You will find that the quotes tend to be entertaining, sarcastic, and incredibly witty.

You can have fun finding your favorite famous TV quotes by your favorite Scrubs character, and you will get a chuckle or a laugh at the funny things said by the characters of the show in this list of famous quotes from Scrubs. 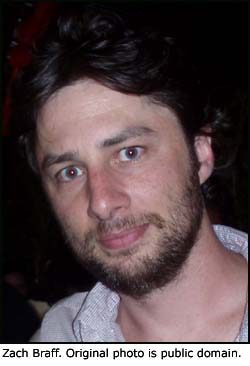 JD Dorian (played by Zach Braff) is the main character of the show, and he is known for his many famous funny Scrubs quotes as well as his incredibly uncommon personality.

JD is a metrosexual man with an all too vivid imagination (which makes for some of the weirdest and most memorable scenes in Scrubs), who somehow manages to succeed as a doctor and have more or less meaningful relationships with a number of women.

Most of his quotes are funny, but they tend to show just how clueless he is when it comes to life in general. Here are some of his best quotes from Scrubs:

JD: Why don't I ever listen to me?

Janitor: Hey have you been stealing pudding cups and toilet paper around here?
JD: No I hate pudding and I don't use toilet paper. I have one of those French things that shoots water up your butt.
Janitor: A bidet?
JD: Bidet to you, sir.

Dr Kelso: Do you want me to order you a clown?
JD: A drunk clown hurt me once.

JD: You see, surgical and medical interns are kind of like two rival gangs. Not real gangs, but more like those cheesy gangs you see in Broadway musicals.

Danni Sullivan: Do you even enjoy hanging out with me?
JD: Enjoy is a strong word.

JD: You're not aware of some sort of underground canal system under the hospital, are you? I think I saw a manatee.
Janitor: Was his name Julian?
JD: We didn't exchange pleasantries.
Janitor: That's Julian.

While Dr. Perry Cox (played by John C. McGinley) is not the main character of the show, he is still by and far one of the most popular.

His many quotes are hilarious and sarcastic, and whenever he is on, he steals the picture - this has happened in every episode since the very first one.

Dr Cox is known for his long winded tirades, and most of his quotes from Scrubs are nasty comments directed at JD, whom he often calls either Newbie or some random (but never repeated) girl's name.

All of the famous TV quotes from Scrubs are entertaining, and these Dr Cox quotes are almost guaranteed to make you laugh.

Dr. Cox (to Dr JD Dorian): So, what you're saying is that you have a problem that is totally your problem, but you'd like to find a way to make that problem my problem. But here's the problem, Newbie: it's not my problem.

Dr Cox: Lady, people aren't chocolates. Do you know what they are mostly? Bastards. Bastard-coated bastards with bastard fillings. But I don't find them half as annoying as I find naive bubble-headed optimists who walk around vomiting sunshine.

Dr Cox: ... But I am afraid that you have confused me with someone who gives a crap, and it's OK, you don't need to be embarrassed. It happens all the time. My father actually made the same mistake on his deathbed.

Dr Cox: But since she brought you into the world, I do have a message for her uterus. Bad uterus! Don’t do that anymore.

JD: Ooh, Dr Cox, can I ask you something?
Dr Cox: The answer is yes, it was me who saw you doing leg lifts in the gym on that inflatable ball. It was quite the display of girl power.

Dr Cox (to Dr. JD Dorian): Newbie, give me a little trouble? I’m having some help here.

Dr Cox: Okay, think of what little patience I have as, oh, I don't know, your virginity. You always thought it would be there, until that night Junior Year when you were feeling a little down about yourself, and pal Kevin, who just wanted to be friends, well he dropped by and he brought a copy of About Last Night and a four-pack of Bartels and James and woo hoo hoo, it was gone forever - just like my patience is now!

Dr Cox (to his young son, Jack): You know, son, as a doctor, I spend a lot of my day dealing with other people’s poop. And I’m not going to lie to you, Jackie, it gets old. Now that's, that’s not to say I haven't enjoyed waking up to a fresh brown trout in your Huggies.

Dr Cox: Oh my God! I care so little I almost passed out.

Dr Cox (to patient): Davey Boy, I promise you, we're gonna find you a kidney. I would swear on my father's grave, but whenever I go there I end up dancing on it.

Dr Cox: How would you like to be in a broken jaw commercial?

Dr Cox: Ladies and gentlemen, allow me to present: Man not Caring.

Dr Cox: She's mad. But she can't give me the silent treatment because she knows I'd actually love that, so she's giving me the talk-until-I-want-to-commit-suicide treatment.

Dr Cox (to Dr. Elliot Reid): Blondie! He is private practice. Those guys are cocky jackasses who don’t give two shakes about anybody else’s opinion but their own. They’re … they’re me, with one addendum: They’re whores. And I'm not talking about the good kind of whores like my ex-wife. They’re whores for money!

Dr Cox: Any other day I’d say no, but today I’m gonna go ahead and just say no.

Doctor Bob Kelso (Ken Jenkins) has to be one of the most sarcastic and curmudgeonly characters of any TV show, and his famous television quotes are full of wit and biting humor.

Dr Kelso: And I need you to crunch the numbers on next year's budget.
Ted: Sir, that would be a job for the accounting department. I'm an attorney.
Dr Kelso: Uh-huh. And speaking of crunching, I have been jonesing for some Double-Stuff Oreos all day. Why don't you see if you can hook me up?

Elliot: Sir, my father cut me off ...
Dr Kelso: Dr Reid, this is not Bring Your Problems to Work Day. This is just Work Day.

Dr Kelso: (about his wife trying to lose weight): Fat camp! Six years she's been going there, and the only thing getting any thinner is my wallet.

Dr Kelso: Don't you know that you're just another pair of scrubs to me?

Dr Kelso: What do you want?
JD: Nothing. I don't want anything from you ever.
Dr Kelso: That's what my son always says. That's until Mother's Day comes around and he wants to go halfsies on the pasta pot for Enid. She's not MY mother, dammit!

Karla: Well, maybe Jake shouldn't have pushed you into that interview.
Elliot: Maybe I should have covered my mouth when I sneezed blood the second time.

Elliot: Well, look, Karla. Jake makes me happy! Plus there's a decent chance that he'll be my second serious boyfriend not to end up in bed with my mother or my brother Barry.

Turk: This is the reason your headache didn't go away. That's actually pronounced analgesic, not anal-gesic. Sir the pills go in your mouth.

Turk: Sir, I promise you, if you offer her the job again she'll say yes. And I'll do anything, I'll pick up extra shifts, I'll volunteer -- I'll volunteer at the clinic; Whatever you want!
Dr. Kelso: Ahh! I want you to kill the giant bat that's been living in my attic!
Turk: You keep Enid in the attic?

The Janitor's Quotes from Scrubs

The Janitor (Neil Flynn) was originally meant to be featured in just a couple of episodes, but soon became Scrubs' breakout character. His many quips and quotes from Scrubs are also usually directed at JD, and he has many hilarious quotes that have made him a legend.

His quotes tend to be dry and witty, and nowhere near as acerbic and biting as the quotes from Scrubs shot at JD by Dr. Cox. His many famous television quotes from Scrubs have made him one of the show's most popular supporting characters.

Janitor: Some hooligan keeps disconnecting the alarm. I told Security to look into it. But no, they'd rather catch the guy who's been stealing organs from the transplant ward.

Janitor: What is it with steel wool? Is it steel? Is it wool?

JD: Go ahead. Insult me like you always do.
Janitor: Too easy. When you least expect it....

JD: This isn't like being a janitor, okay? It's not just like something everybody can do.
Janitor: Oh so you can do my stuff but I can't do yours?
JD: Yes!
Janitor: Okay, hotshot. What would you use to get a coffee stain up off a tile floor?
JD: I don't know...the rough side of a sponge?
Janitor: Damn it!

Janitor: (to JD): You seem unhappy. I like that.

JD: Why do you keep a globe on your janitor cart?
Janitor: In case I get lost.

There are dozens of characters that were vital to make the show the success that it was, and many famous television quotes from Scrubs were said by characters like The Todd (played by Robert Maschio), Ted (played by Sam Lloyd), and Dr Cox's acerbic and nasty wife Jordan Cox (played by Christa Miller).

Ted: If you need some happy pills, they are in the top drawer.
JD: In this hell hole, I will need a gun.
Ted: Bottom left.

JD: Here at Sacred Heart, you get to work with some of the finest doctors in the country.
Todd: Out of my way. I've got a doozy of a twosie.

Lonnie: Thanks for moving that.
Jordan: Keep moving, fetus face.

Ted: There you are, you deaf bastard. I hate you so much, every time you utter my name, I want to stick my fist all the way down your throat and watch you slowly choke on it.
Dr. Kelso: Ted, I can hear now.
Ted: Who's Ted?

Elliot: Laverne, did you ever notice that in hospitals, even though you are surrounded by like hundreds of people, it's still so easy to get lost in your own thoughts?
Laverne: Have you been drinking?

And finally, Quotescoop.com's very own favorite, one of the best of all the scrubs quotes, ever. It is a soliloquy spoken by Dr Perry Cox's wife, Jordan Cox:

Jordan: I am woman in her very, very, very late 30s who has problems opening herself up to love. I hate being vulnerable. I still play mind games. Hell, to make Perry feel inadequate, sometimes I fake not having orgasms.

Back to the top of this page about Scrubs Quotes