• Looking for some hilarious short funny quotes that deliver a good laugh in no time?

• Here you'll find some humorous quotes and phrases that you can use for just about anything: funny speeches, book introductions, sharp letters, surprising sms'es, uplifting emails or just plain good fun!

Some believe in fate, others in God, some in good luck.

We here at Quotescoop.com believe in many things as long as the beliefs aren't limiting us or making us feel bad.

If the beliefs are positive and empowering, we'll go for them - if not, we don't deem them worthy of our attention.

One of the things we believe in is the power of good humor. Humorous phrases make us relax, open up and take the world less seriously.

Here are some funny short quotes about believing:

I would never die for my beliefs because I might be wrong.
~ Bertrand Russell ~

I can believe anything, provided it is quite incredible.
~ Oscar Wilde ~

You must believe in free will; there is no choice.
~ Isaac Bashevis Singer ~

The public will believe anything, so long as it is not founded on truth.
~ Dame Edith Sitwell ~

I believe in equality for everyone, except reporters and photographers.
~ Gandhi ~


Money & Man = A Celebration of Stupidity! 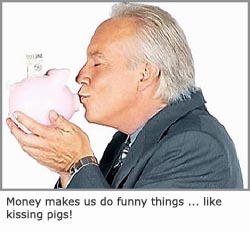 Does money make the world go round?

Well, it certainly makes people go round in circles, that's for sure! And some may even afford to let the circle be the globe!

Typically the effect of money is this: Put the potential of money into a situation and people go stupid. They equate money with power. External power and control, that is - which has nothing to do with internal power and authenticity!

Well, in the name of humorous power that makes us feel good inside, here are some short funny money quotes:

Money is better than poverty, if only for financial reasons.
~ Woody Allen ~

I'm so poor I can't even pay attention.
~ Ron Kittle ~

A bank is a place where they lend you an umbrella in fair weather and ask for it back when it begins to rain.
~ Robert Frost ~

I wish that dear Karl could have spent more time acquiring capital instead of merely writing about it.
~ Jenny Marx ~

There are three ways of losing money: racing is the quickest, women the most pleasant, and farming the most certain.
~ Lord Amherst ~

A bargain is something you can’t use at a price you can’t resist.
~ Franklin Jones ~

Part of the $10 million I spent on gambling, part on booze and part on women. The rest I spent foolishly.
~ George Raft ~

Why is there so much month left at the end of the money?
~ John Barrymore ~

A nickel ain't worth a dime anymore.
~ Yogi Berra ~

Marriage, the Proof of the Existence of Cosmic Humor!

Why do people do it?

And here we're not speaking about the 'naughty' thing but the somewhat strange thing, like getting married.

Marriage as a subject is a funny one as you will discover with funny quotes about marriage.

Everybody seems to want it even though they don't want the life that comes with it.

We humans are a funny self contradictory species - we happily buy the dream well knowing it's a dream that probably will turn into a nightmare.

But maybe we're all just part of a great cosmic joke - that would sort of explain it! :-)

Anyway, enjoy yourself with these funny husband and wife quotes:

I haven't spoken to my wife in years. I didn't want to interrupt her.
~ Rodney Dangerfield ~

He taught me housekeeping; when I divorce I keep the house.
~ Zsa Zsa Gabor ~

The best way to remember your wife's birthday is to forget it once.
~ H.V. Prochnow ~


Three rings of marriage are the engagement ring, the wedding ring, and the suffering.
~ Funny Short Saying ~

A man is incomplete until he is married. After that, he is finished.
~ Zsa Zsa Gabor ~

The man who says his wife can't take a joke, forgets that she took him.
~ Oscar Wilde ~

An archaeologist is the best husband a woman can have. The older she gets, the more interested he is in her.
~ Agatha Christie ~

My husband and I divorced over religious differences. He thought he was God, and I didn't.
~ Short Funny Quotes ~

I had some words with my wife, and she had some paragraphs with me.
~ Sigmund Freud ~

My wife and I were happy for twenty years. Then we met.
~ Rodney Dangerfield ~

Marriage is like a phone call in the night: first the ring, and then you wake up.
~ Evelyn Hendrickson ~

I came from a big family. As a matter of fact, I never got to sleep alone until I was married.
~ Lewis Grizzard ~

I've had bad luck with both my wives. The first one left me, and the second one didn't.
~ James Holt McGavra ~

It's a funny thing that when a man hasn't anything on earth to worry about, he goes off and gets married.
~ Robert Frost ~

All marriages are happy. It's the living together afterward that causes all the trouble.
~ Raymond Hull ~

And now from short funny quotes about marriage to funny insanity quotes. No comments necessary!

Are they normal and mainstream?

Most likely they have a streak of insanity in their personality. They're original and do things you'd wish you'd dare. Their slight madness and disregard of rules and norms make their life rich with potential.

Because in order to get a more out of life, we do need to transgress the comfort zone of normality.

Here are some funny insanity quotes and madness quotes to celebrate the beauty of diversity:

Roses are red, violets are blue, I'm schizophrenic, and so am I.
~ Oscar Levant ~

Insanity is hereditary. You get it from your children.
~ Samuel Levenson ~

Never get into an argument with a schizophrenic person and say, "Who do you think you are?"
~ Ray Combs ~

I am a kind of paranoiac in reverse. I suspect people of plotting to make me happy.
~ J. D. Salinger ~

I moved to New York City for my health. I'm paranoid and it was the only place where my fears were justified.
~ Anita Weiss ~ I don't suffer from insanity. I enjoy every minute of it.
~ Funny Short Saying ~ 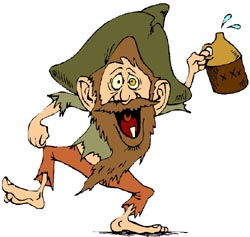 Well, they say drinking is bad for your health, your marriage, your sanity ...

So what is drinking really good for?

Well, even though drinking is said to ruthlessly murder our brain cells, it doesn't seem to kill our good sense of humor, does it?

So despite being bad for many things, we can safely say that drinking is good for one thing - namely, providing us with some hilarious short funny quotes about drinking.

So, lean back and pour in these funny alcohol quotes:

I used to jog but the ice cubes kept falling out of my glass.
~ David Lee Roth ~

I never drink water because of the disgusting things that fish do in it.
~ W. C. Fields ~

I distrust camels, and anyone else who can go a week without a drink.
~ Joe E. Lewis ~

Prohibition makes you want to cry into your beer and denies you the beer to cry into.
~ Don Marquis ~

Beer is the reason I get out of bed every afternoon.
~ Funny short saying ~ This is one of the disadvantages of wine; it makes a man mistake words for thoughts.
~ Samuel Johnson ~

Drinking makes such fools of people, and people are such fools to begin with, that it's compounding a felony.
~ Robert Benchley ~

I'm going to be around until the Atomic Energy Commission finds a safe place to bury my liver.
~ Phil Harris ~

Be wary of strong drink. It can make you shoot at tax collectors ... and miss.
~ Robert Heinlein ~

Alcohol may be man's worst enemy, but the bible says love your enemy.
~ Frank Sinatra ~

I envy people who drink - at least they know what to blame everything on.
~ Oscar Levant ~ 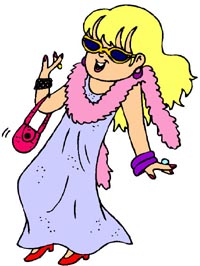 Seldom is a word so loaded with preconceived meanings as the word Hollywood.

"Hollywood" carries a bunch of values many of which are not that flattering. You know like: superficial, dumb and greedy!

And all depending on who you are you might like or dislike the values of: blond and silicone!

Hollywood In Hollywood a marriage is a success if it outlasts milk.
~ Rita Rudner ~

Hollywood is where they shoot too many pictures and not enough actors.
~ Walter Winchell ~

Half the people in Hollywood are dying to be discovered and the other half are afraid they will be.
~ Lionel Barrymore ~

Every country gets the circus it deserves. Spain gets bullfights. Italy gets the Catholic Church. America gets Hollywood.
~ Erica Jong ~

In Beverly Hills they don't throw their garbage away. They make it into television shows.
~ Woody Allen ~

In Hollywood, if you don't have happiness you send out for it.
~ Rex Reed ~

It's a scientific fact. For every year a person lives in Hollywood, they lose two points of their IQ.
~ Truman Capote ~

The only 'ism' Hollywood believes in is plagiarism.
~ Dorothy Parker ~

Hollywood makes prostitutes out of women and sissies out of men.
~ Funny Short Saying ~

Any girl can be glamorous. All you have to do is stand still and look stupid.
~ Hedy Lamarr ~

And now for the last batch of short funny quotes!

Procrastination is the art of keeping up with yesterday.
~ Don Marquis ~

Moderation is a virtue only in those who are thought to have an alternative.
~ Henry A. Kissinger ~

Military justice is to justice what military music is to music.
~ Groucho Marx ~

She was what we used to call a suicide blond - dyed by her own hand.
~ Saul Bellow ~

I intend to live forever. So far, so good.
~ Steven Wright ~

I have tried to know absolutely nothing about a great many things, and I have succeeded fairly well.
~ Robert Benchley ~

I never said most of the things I said.
~ Yogi Berra ~

I busted a mirror and got seven years bad luck, but my lawyer thinks he can get me five.
~ Steven Wright ~

I am not afraid of death, I just don't want to be there when it happens.
~ Woody Allen ~

I am the literary equivalent of a Big Mac and Fries.
~ Stephen King ~

Anyone who says he can see through women is missing a lot.
~ Groucho Marx ~

We hope you enjoyed our selection of short funny quotes and humorous phrases. If you're still hungry for more short funny quotes, you're more than welcome to continue your visit on our humor website. See the links below! :-)

A Real Treasure of Funny Quotes and Funny Sayings

Back to the top of this page about Short Funny Quotes and Quick, Razor-Sharp Humor!